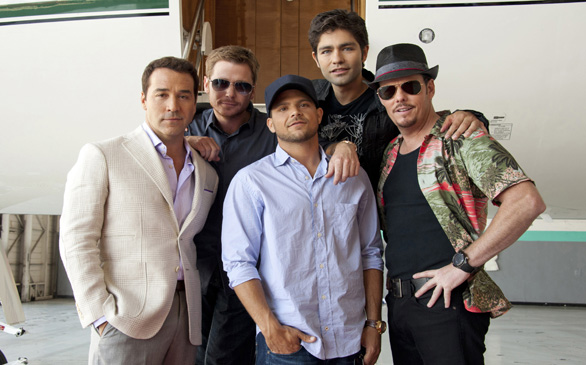 This year has been full of big farewells – especially when it comes to entertainment. Think about it: Oprah left her talk show. Phil Jackson left the Lakers. And Christopher Meloni left “Law & Order: SVU.” Then we saw the end of “Friday Night Lights.” And we continue to wave our wands goodbye to the Boy Who Lived as Harry Potter and the Deathly Hallows: Part 2 takes over the box office. But 2011 isn’t finished closing doors. Here are a few more favorites to cherish before they leave screens big and small:

“The Closer”: TNT started the seventh and final season of this breakout hit on July 11. The show stars Kyra Sedgwick as Brenda Leigh Johnson, LAPD’s major crimes deputy chief. Sedgwick won an Emmy, and last season was the show’s most watched, but all good things must come to an end. At least we get some 21 episodes before the show is replaced with a spin-off sans Brenda: “Major Crimes.” Sedgwick says the choice was all about leaving strong.

“Entourage”: HBO’s bad boys began their eighth and final season July 24, aiming to wrap up the life of super star Vince Chase and friends. The show, loosely based on the life and friends of movie star Mark Wahlberg, has been an HBO favorite. So what will happen to our Hollywood hot boys? Right now what we know is Vince went to rehab, Ari and his wife are on the outs, Sloane sent her ring back to Eric, Drama has a hit on his hands and Turtle wants to strike out on his own. That’s a lot to wrap up in one season. But you know it’s going to be one hot and crazy ride.

“All My Children” and “One Life to Live”: Some say the soap opera era is done. ABC is leading the downfall by kicking two classic soaps (we’re talking over 20,000 episodes combined) to the curb in favor of more shows like “The View.” So kiss the people of Llanview and Pine Valley goodbye. “AMC” leaves the air in September, “OLTL” in January. But fans of webisodes are in luck. Online distribution company Prospect Park recently bought the rights to both the shows, and it plans to turn out Web series soon. Eh.

The Twilight Saga: Breaking Dawn – Part 1: It doesn’t matter if you’re Team Edward or Team Jacob: We’re coming up on the beginning of the end of this supernatural love triangle. Bella and Edward get married. And you know what they say, first comes love, then comes marriage. But a lot of drama and fight will come with this baby carriage. We’ll see it on the big screen Nov. 18 followed by Part 2, the final flick, a year later. Fangs or fur, let the long kiss goodnight begin.

The Social Network? All right, it’s highly doubtful we’re seeing the downfall of Facebook and its 750 million users. But people are touting Google+ as the Facebook killer. Didn’t they say that about Twitter? Still, ever since Facebook killed MySpace a few years ago, social media lovers have been predicting karma would come around. It’s hard to say if that will happen. But even Mark Zuckerberg, Mr. Facebook himself, has joined Google’s new, small, invite-only network. You just never know.