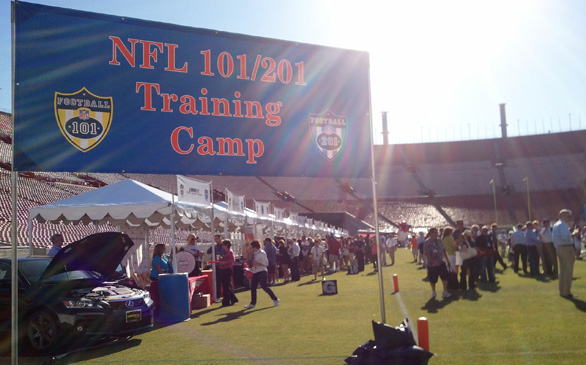 Football, food and celebrities attracted hundreds of sports fanatics to the Los Angeles Coliseum on July 18. People from across the country came to be a part of the ninth annual NFL 101 All-Access event. Fans were able to be up close and personal with their favorite teams getting an inside look at what’s to come this season.

Fans were also able to take part in the NFL 101 play like a pro competition, which consisted of four courses: a quarter back challenge, which tested distance and accuracy, a wide receiver challenge, and field goal kick challenge. Kids were given tips from NFL coaches and players such as Shaun Phillips from the Chargers, and ex-Tennessee Titans head coach Jeff Fisher.

In order to get a closer look, the event allowed a locker room tour that displayed the equipment athletes wear on the field. Fans were able to look at gear worn by players such as NY Jets QB Mark Sanchez and Miami Dolphins WR Brandon Marshall.

Later in the evening a discussion panel was hosted by NBC Sports reporter Andrea Kremer which included Kurt Warner, Jeff Fisher, Marvin Lewis, Clay Matthews and many more. The panel spoke about a team coming to L.A. and what that can do for the city of angels.

They also spoke of new rules, the changes in fining players for leading with your helmet hits on offensive players, and the NFL lockout that will hopefully be over soon. All stressed how it’s all or nothing in the game of football, but that’s what makes people love the game.