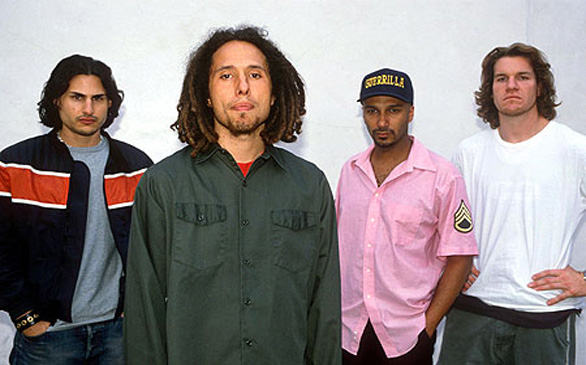 Rumors and speculation about L.A. Rising quickly became the talk of the music scene since its teaser announcement earlier this year at Coachella. Once Goldenvoice confirmed the lineup, everyone in Southern California knew exactly what they would be doing come July 30. Rage Against the Machine, Muse, Rise Against, Ms. Lauryn Hill, Immortal Technique and El Gran Silencio will participate in the daylong musical event combining multiple genres at the Memorial Coliseum in Los Angeles.

Goldenvoice and Rage Against the Machine have a history of collaborating across Southern California for memorable events. Rage headlined the inaugural Coachella Valley Music & Arts Festival in 1999, and the festival also hosted the band’s first reunion show in 2007. L.A. Rising will be Rage’s second hometown show since last summer’s “Benefit for the SoundStrike” which battled Arizona’s anti-immigrant law at the Palladium. It marks their first outdoor event in Los Angeles in over a decade and an unforgettable summer experience for everyone.

Aside from a stellar bill, Rage Against the Machine will be celebrating a landmark achievement as a band.

“I’m very excited to be rocking our hometown, Los Angeles, on a date that is very very near to the 20th anniversary of the first time the four members of Rage Against the Machine were in the same room together” shares Tom Morello.

“We began rehearsing in the first or second week of August in 1991. We were thrashing about songs that would become ‘Bombtrack,’ ‘Know Your Enemy,’ ‘Take the Power Back’ and ‘Freedom’ in a small rehearsal space. At the time we had no idea that anyone would ever hear these songs,” adds Morello.

The British trio Muse will also co-headline the event. No strangers to stadium crowds, they’ve been touring the world supporting their 2009 album The Resistance. Their two-night appearance at the Staples Center drew sold-out crowds last September. Each of Muse’s shows incorporates a unique blend of high-paced guitar riffs and mind-boggling melodies accompanied by elaborate stage-show theatrics.

The Resistance ideology blends perfectly alongside Rage’s anti-government movement, providing an extra flavor for musical taste. Lead singer Matthew?Bellamy’s wide vocal range will certainly attract just as many spectators as any on the solidifying the star-studded bill.

Chicago-based four-piece Rise Against brings hardcore punk and aggressive speed into the lineup. Their highly addictive riffs and fast-paced melodies have made them fan favorites across the L.A. area and KROQ’s radio scene.

“L.A. Rising might be one of the biggest shows we’ve played, period” shares Rise Against frontman Tim McIlrath.

“When we got the call it was pretty exciting, and we felt pretty humble to be a part of what is going to be an epic night. We feel very lucky to be a part of such a cool show, in Los Angeles, at the Coliseum. It’s hard to wrap your head around 60,000 people and what that will look like,” continues Mcllrath.

“It’s a great honor to play with Rage Against the Machine, they paved the way for politically motivated rock ’n’ roll bands” adds guitarist Zach Bair. “They set the standard for what we could be influenced by.”

Ms. Lauryn Hill and Immortal Technique have graced the stages of Rock the Bells over the past few years. Ms. Hill’s Fugees notoriety of political and social awareness launched her into an illustrious solo career. Her soft beat approach and soothing vocal chords will add a distinctive layer to the hard-hitting bill.

Immortal Technique has graced the stage with Rage before. Their similar messages are both well received amongst fans although delivered from a different format.

“Rage’s deep rooted rock ’n’ roll captures the struggle of immigration and political organizing” shares Immortal Technique. “We are all in the struggle to get people to open their minds and think for themselves. We want people to understand what democracy really means, and that is: setting up those institutions that protect civil liberties of the people.”

Setting aside the Electric Daisy Festival, the last time a major headlining act performed at the Coliseum was Summer Sanitarium in 2003 headlined by Metallica. With another Rage and Goldenvoice collaboration, let’s hope this becomes an annual event instead of waiting eight years for another major concert bill at the stadium.