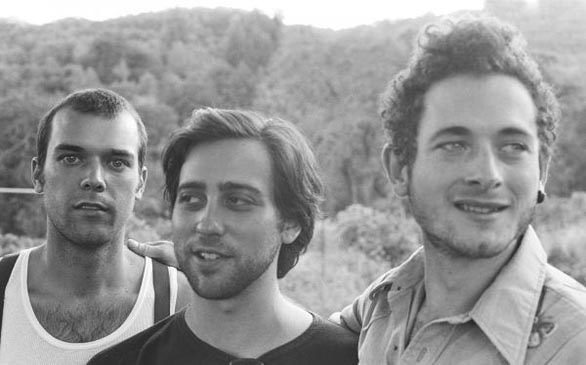 Braving the freeways in the middle of the Carmageddon weekend to see a young, fairly little-known band play would have been a terrible idea, except that the roads were wide and clear and said band delivered an impressive show that was simultaneously refreshing and evocative, an almost unheard of pairing amidst the current sea of synth and Auto-tuned warbling of the mainstream music scene.

With a restaurant full of people feasting on moo shu in the next room, the three members of Berkeley-based alternative folk band Song Preservation Society came out on stage with nothing but their guitars in the intimate music lounge (read: small and cozy. But how else would you really have it?) of Genghis Cohen in West Hollywood.

Daniel Wright, Trevor Bahnson and Ethan Glazer greeted an enthusiastic audience with a short a cappella, echoing a retro singing group sans coordinating fedoras and bow ties. This was soon followed by a polyphony of acoustic guitars and harmonious vocals in their performance of “Just Like a Dream,” a definite standout in their solid set of original folksy tracks with its mesmerizing melody and wistful lyrics. Captivating and charming its audience from beginning to end, the band also performed crowd-pleasing covers of Daniel Johnston’s “True Love Will Find You in the End,” Fleet Foxes’ “White Winter Hymnal” and the Beach Boys’ “Barbara Ann,” renditions that were sincere yet delightful tributes to the originals.

The trio’s music, with their sweet-sounding voices and astounding guitar skills, is reminiscent of the poignancy of a Simon & Garfunkel record, only updated with youthful energy and fresh appeal. Just like driving around in a traffic-free Los Angeles, hearing real vocal talent and good old acoustic guitar skills from young newcomers is a special treat, and Song Preservation Society offers just that to those lucky enough to be in the know.