Those Darlins: Get Loose at the Echo 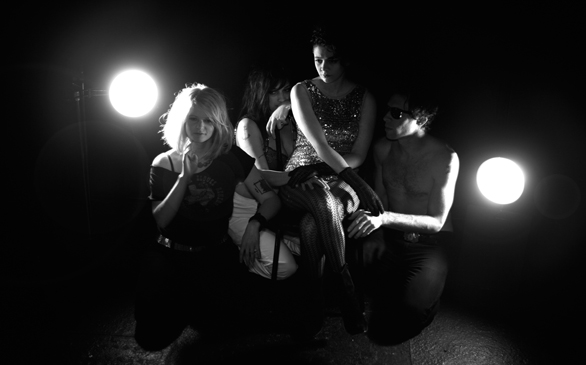 Listening to the new album Screws Get Loose it’s hard to believe that self-described rock ’n’ roll group Those Darlins got started in the music racket by covering country songs. Although their stylized catchy tunes could easily classify as pop, they deal in edgy and intelligible content reminiscent of punk rock. Whichever genre you want to stick to it, Screws Get Loose is a powerful album and fun to listen to. The group is set to launch an extended national tour for this, their second album.

The Tennessee-based bunch met in Murfreesboro. United by their love for traditional country music and artistic backgrounds they started playing locally as a cover band but quickly tired of performing other people’s work and began writing their own music with their own style.

Guitarist Jessi Darlin explains how the group of friends joined up to simply play music and very soon after changed their tune: “We just played covers. We played at restaurants and stuff. Then we learned pretty quickly that we were not suited for that type of image.”

Now the group, named after baritone ukulele player Nikki Darlin’s childhood softball team, is playing out of Nashville and touring the nation. According to Jessi, Those Darlins have been influenced by everything from the Beatles to the Ramones, from the Beach Boys to Hank Williams. The band stays close, and everyone brings their specific influences to the table.

“For us, it’s just like finding music we like, getting inspired by what we’re listening to and then putting it all together,” says Jessi.

The band typically demos ideas for songs brought to the group by one of the members on an old eight-track recorder then takes their best creations to the studio. Other times, they all get together and work out a new tune.

“We’ve all been very good about being open to whatever one of us is inspired by at the time. Sometimes we collaboratively do stuff, but I think a lot of the good parts happen in the studio when we actually go to record a song – somebody will put something on, and everybody will think it’s cool. It just depends, we kind of do it in all different ways.”

“We made sure from the beginning that everything looked pro, so if you saw us play and you googled us later you’d see this was a real band. We made lots of cool merchandise and just had fun with that aspect of it too,” says Jessi.

You can check out the video for their track “Be Your Bro” and the design styles done by the band members themselves on the band’s Web site.

Those Darlins have been rocking the stage since 2006, taking their act across the country and fashioning original sounds in the studio. The group’s new album sounds a little bit classic rock ’n’ roll and a little bit female-empowered punk rock. Its gritty tone contrasted with a charming quality and genuine lyricism makes for a good listen.

“I’m very proud of the new album. It came together really smoothly. Within two months, everyone kind of just brought it together,” Jessi says.

The musicians spent a quick 11 days in the studio to complete their second album.

“We tried to do it really fast because the first one took forever, and it was just cool to go in and get it done and not just keep dragging it out,” she says.

Those Darlins perform July 29 at the Echo. For more information, visit thosedarlins.com.