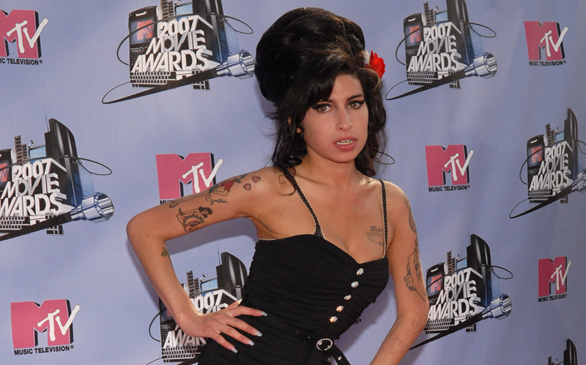 It takes focus right now to actually hear Amy Winehouse’s voice amid all the chatter, to appreciate the breath and hum that created Back to Black, her devastating second, and final, album. After all, the lurid, sad craziness of her addiction, to which she apparently succumbed over the weekend at her home in London, was her story line – as was failure – and her honesty and openness in tackling the subjects, coupled with her charisma and vocal swagger, was her allure. Had she sung about her family trying to make her go to a barbecue instead of rehab, or had she titled her breakout album Back to Pink, well, you wouldn’t be reading this right now. Her story was her trouble.

But her death Saturday at age 27 resonates because of that ragged, beautiful voice and that singular record, Back to Black. It resonates because in 2006, the notion that a singer could somehow resurrect and re-imagine soul music in a way that rang true for a new generation seemed not only improbable but also ill advised, let alone that these songs be delivered by a lady Brit with a crooked beehive and Cleopatra eyeliner.

But then you hear “Love Is a Losing Game,” the wrenching, perfect antiballad from Back to Black, or you get lost inside the swirl of sound and rhythm in “Rehab,” or gaze into the abyss that is the title track, the singer who “died a hundred times” when she lost her lover to another, the voice that can’t stop uttering, “black, black, black,” and you begin to understand. With a style that drew on classic ‘60s soul and rhythm and blues idioms as originally released by Atlantic, Stax and Motown, Winehouse and Back to Black producers Mark Ronson and Salaam Remi updated the sound with an urgent modern backbeat. A return to classic forms had been bubbling in the British and American underground but was ignored by the mainstream, and Winehouse, with her mound of black hair and tattooed arms, manifested it with a devil-may-care attitude.

In an era of manufactured image as perfected by Lady Gaga and Katy Perry, Winehouse’s voice resonated particularly because she lived so transparently, from the lyrics she chose to write to the way she casually but confidently phrased them, not to mention the way she conducted herself with her fans and the media. Hers was a blue-collar voice, one that channeled the critic inside all of us that presumes failure, that tells us we’re less than we are, that knows bad stuff is going to happen and we’re foolish to try to stop it. It’s the voice of the defeated, the dangerously in love, the frightened, and it screams louder in the psyches of some people than in others. Those within whom it is the most nagging and relentless are often those who try to shut it up with alcohol or drugs.

Winehouse’s struggles were a very public manifestation of something many of us deal with everyday: how to dig out of a rut, how to break a cycle, how to receive help and still be true to oneself. How to have fun. How to live.

“To be honest, my husband’s away, I’m bored, I’m young,” Winehouse told Rolling Stone magazine in 2008, with heartbreaking self-awareness. “I felt like there was nothing to live for. It’s just been a low ebb.”

Misdirected energy is sad, and wasted promise is heartbreaking, even if it’s true that much of our aesthetic gratification comes at the expense of some creative person’s suffering. But the pain-for-art trade-off is such a lame cliche, one that countless losers and talentless addicts rely on to explain away their failure. Winehouse’s artistic life, too, was a failure if measured in unrealized potential, even if said disappointment fueled her lyrics.

For all the desperation, though, the optimism was in her voice, and in the music, and in the production. Upon first hearing her, how could you not but be overcome with the notion that something so blessed, so rich, so emotive, could not only dwell within the tattooed bag of bones that entombed it but also support it? How could you not hope that it would outshine the lopsided beehive that signified her demons, and somehow eke its way out of a consciousness obsessed with addiction?

Winehouse wrote Back to Black while she and her on-again-off-again, boyfriend-to-be-husband-to-be-ex-husband Blake Fielder-Civil were broken up, but each declaration of defeat, each self-loathing line is wrapped by producers Ronson and Remi in the comfort of hand claps and horn sections, backbeats and string swoops, of quiet piano dots that punctuate the lines, “Five-story fire as you came, love is a losing game.” Gospel-inspired backing vocals suggest salvation, even when Winehouse is singing about despair. The resulting tension drives the record.

Indeed, Winehouse would not have landed on the charts were it not for Ronson and Remi, who had the foresight, smarts and, most important, good taste to harness Winehouse’s voice and lyrics on a bed of music by the expert band the Dap-Kings, best known these days as Sharon Jones’ outfit. No matter how beaten down Winehouse sounds on the album, the music is so buoyant and life-affirming that it tempers the message, makes one believe that magic can overpower despair and addiction.

Listen to the music on “Rehab” – the momentum is remarkable: no eight bars are the same, the Dap-Kings swinging and lifting Winehouse’s voice like angels whisking away a casket and then drawing circles in the sky. The image of paramedics carrying her body out of her home is the hardest to shake, even if it fills me with a sense of wonder: That this small lump under a red blanket contained that voice, that honesty, that turmoil and magnetism, is truly the thing of magic. Thankfully, the music is the one thing that her addiction will never be able to negate.