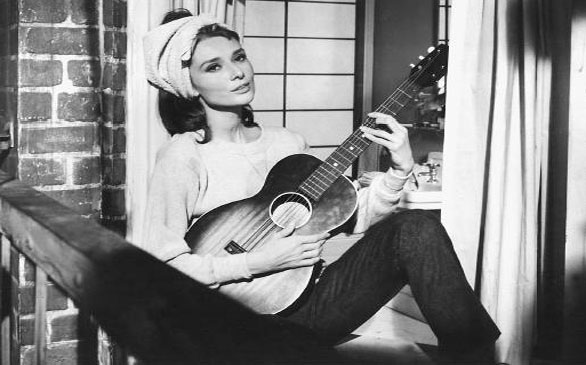 Can you imagine if Marilyn Monroe actually played Holly Golightly instead of Audrey Hepburn in Breakfast at Tiffany’s? The blonde bombshell was Truman Capote’s first pick for the role of the high-class call girl. Thank goodness that even a genius like Capote can have lapses of faulty judgment; because no disrespect for Norma Jeane – who turned down the part because she was advised that playing a prostitute would tarnish her image (I think other things may have done that.) – but considering her seductive, borderline soft-pornographic “Happy Birthday, Mr. President” performance, “Moon River” could have totally gone wrong. Really wrong. A certain pop tart’s cover of “I Love Rock ’n’ Roll” wrong.

As chic as prostitution can get (read: only in film), you can’t get any more elegant than Hepburn in her little black Givenchy dress, oversized black sunglasses, elbow length gloves and a pearl necklace. Holly Golightly is the prototype of the single girl trying to survive in the city. Despite her independent streak however, the movie goes to show that in the end we are all just defenseless suckers for, dare I say it, LOVE. Even Marilyn Monroe would agree.

Let out the screaming romantic that you’ve repressed all these years and see Breakfast at Tiffany’s on the big screen. For the film’s 50th anniversary, the Academy of Motion Picture Arts and Sciences is showing the classic rom-com in the Samuel Goldwyn Theater in Beverly Hills. There’s no better way to experience it in all its sweet and charming glory other than in the comfort of a dark room full of people who are just as romantically gooey as you.

Nothing goes together more beautifully than dinner and a movie – a feast for your mouth and your eyes. Now take both of those outside where you can bask in the warm, starry summer evenings which, you’ll surely miss come those chilly winter nights where you’ll be resorted to slurping a cup of ramen in your Snuggie and, I don’t know, knitting.

The festival boasts “the LARGEST outdoor movie screen on the West Coast, standing at three stories tall and 52 feet wide.” Forget the usual butter-drenched popcorn and chocolate malt balls, as there will be new food trucks every week to satisfy your cravings. You can even listen to music from live band performances.

On July 30, you can see L.A. Confidential (1997) and the band State to State at the Los Angeles State Historic Park. The food-truck lineup that night will include Kabob N Roll, Lee’s Philly, India Jones, Don Chow Tacos, Frysmith and Mango Tango Ice. Although woven picnic baskets are unnecessary, make sure to bring blankets for your lounging pleasure. Watch out for Fight Club, Raiders of the Lost Ark, Mamma Mia! and Close Encounters, which will all be playing the rest of the summer.

I don’t know what it is about John Travolta, but there is no other male creature – Zac Efron included – who can make you love a high school musical more. Grease (1978) is set in a 1950s suburban high school wherein leather-clad, jet black pompadoured Danny Zuko is the smooth-talking bad boy for whom squeaky clean Sandy in her blonde ringlets squeezes herself in to the tightest, shiniest black spandex ever.

With catchy tunes like “Summer Nights,” “Hopelessly Devoted to You,” “Beauty School Drop Out” and “You’re the One That I Want” (ooh, ooh, ooh), you will leave the theater wishing that you lived a real-life musical in which boys still combed their hair and random dance numbers weren’t reserved to choreographed flash mobs. The screening will be followed by a discussion with director Randal Kleiser who also directed The Blue Lagoon (1980), Honey, I Blew Up the Kid (1992) and Disneyland’s Honey, I Shrunk the Audience in 3-D, which is always a treat.

It’s such a shame that as 3-D technology gets better, the musical film genre does not. Who knows? Maybe that Footloose remake won’t be as awful as it looks, but for now sticking to a classic like Grease is a much safer bet.