What I Learned at Comic-Con: Ten Things I Discovered at the San Diego Geekfest 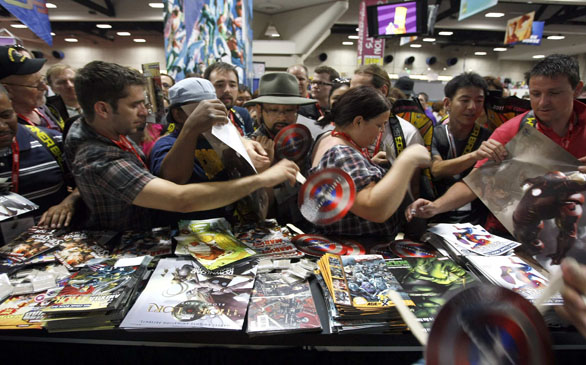 It was snatch-and-grab at the "Marvel" table as attendees gobble up give-aways at Comic-Con.
(Credit: Kirk McKoy/Los Angeles Times/MCT)

Call me presumptuous, but I think I deserve some kind of badge of honor for surviving through five Comic-Cons. No? Well, here are a few things I’ve picked up on since making my first annual trek to the San Diego festivities in 2007:

1) If you plan to show up an hour early to a panel in either Ballroom 20 or Hall H: Do. Not. Bother. The 1,200 or so deodorant-challenged individuals already in line thought a three-hour headstart was wise ... and that doesn’t include the other 800 who got there at the buttcrack of dawn to see a sneak peek of a movie they can eventually catch on YouTube one hour later (Note to Comic-Con organizers: Please set up a frickin’ system that can accommodate press in a more efficient way.).

2) However, if you’re really desperate to get in, hover near the exit and ask attendees if they plan to go back inside. They’ll be the ones holding little colored pieces of paper that grants them a re-entry; hopefully they’ll give you their slip. Unfortunately, this didn’t work for me during my attempts to catch Sarah Michelle Gellar during the “Ringer” panel (her new CW drama).

3) Those kids (and by “kids,” I mean anyone more than 10 years younger than me) standing in the convention center hallways holding signs for “Free Hugs” ... don’t. Just don’t.

4) If you MUST get a poster autographed by the cast of “Teen Wolf,” “True Blood” or “The Walking Dead,” by all means, go out and brave the mass hysteria on the floor of the main exhibition hall. Just don’t come back whining when you get a black eye from the elbow that clocked you when they were giving away ... free key chains.

5) Despite the bombardment of e-mails from publicists, there are always invitations to parties or special events where the amenities are out of this world for members of the press. At the Robert Rodriguez party, we dined on prime rib and truffle baked potato slices and enjoyed a build-your-own-ice-cream-sundae bar. At the Wired magazine lounge I got free personalized engraving on my iPhone case, took a picture with the performers from the Cirque du Soleil show, “Ka,” slurped up some TruBlood at the open bar and got a Budweiser T-shirt. At the ICM party, I discovered in my gift bag a colorful Atari tee and a Motorola wireless Bluetooth speakerphone for the car. While relaxing at the Limitless Café at the Arts & Cinema Centre, I enjoyed a turkey sandwich, a free copy of the Bradley Cooper thriller on DVD and a complimentary bottle of the new Kenneth Cole fragrance, Connected. And at the launch party for the film Tucker and Dale Vs. Evil, we were bestowed with several Blu-rays, a bottle of Muscle Milk, a trucker cap, several postcards and ... a mason jar. In short, it’s good to be press.

6) One bottle of Bud Light + 1 TruBlood margarita + 2 vodka tonics + a random cocktail someone gives you at the UTA party = one sleepless night with acid reflux.

6a) Eliza Dushku (“Buffy,” “Dollhouse” and currently on USA’s “White Collar”) is absolutely gorgeous in person.

7) Again, Hall H. Not worth the six-hour wait in line. Well, depending on the panel. If Steven Spielberg decides to make an appearance, you go ahead, be a good fanboy and worship at that altar of pop culture.

8) Those oversized canvas bags they pass out at the entrance only make you look like a loser. Bring a backpack instead. Or take said oversized bag and use it for laundry when you get home.

9) Journalists and bloggers love their swag, free food, open bars and any opportunity to harshly critique anything to one another in between bites of free dessert.

10) Don’t order the fried calamari at the Broken Yolk Café on 7th Street. I’ve seen sludge in gutters more appetizing than the lame starter platter they serve over at that place.

That all said, I cannot wait for next year. That reminds me: must book hotel room for 2012 … now.