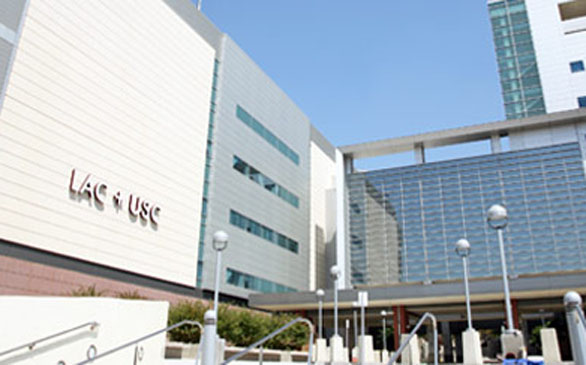 Research for the cervical cancer study will be conducted at LA County-USC Medical Center.

USC is primarily known for its athletics, but once you step off the field and into the classroom, Trojans throughout campus are looking to make a difference. This past semester alone USC has received large donations to the school, along with a number of research grants. Among those, a team of faculty members and graduate students recently received a four-year, $3 million multilevel research grant from the National Institute of Health.

This project is led by USC Annenberg professors Sheila Murphy and Sandra Ball-Rokeach and currently works with Communication doctoral students from the USC Metamorphosis Project. The project examines how individual, interpersonal and community factors affect the likelihood of Hispanic women taking the steps to prevent and treat cervical cancer. The team has partnered with doctors and nurses at the LA County-USC Medical Center where the research will be conducted.

Compared to non-Hispanic women, Hispanic women have twice the risk of developing cervical cancer. Experts believe that Hispanic women are less likely to get regular pap tests, which can detect the disease in its early and curable stage.

“Latina women have high mortality rates due to cervical cancer,” says Carmen Gonzalez, a research assistant on the project, “and that could be avoided if we had a better way to communicate the importance of early screening.”

This project is an attempt to understand how to best communicate about cervical cancer to the Hispanic community in Los Angeles. It will include a large-scale quantitative survey administered through touch-screen technology, an in-depth analysis of the community’s health storytelling network and focus groups with members of the study population to form an ecological approach.

“The information we gather in this study will help to develop educational materials and interventions to increase pap tests among Latina women and hopefully reduce the incidence of cervical cancer,” says Meghan Moran, USC Alumni and current Assistant Professor at San Diego State University.

Cervical cancer can typically be stopped if abnormal cells are found early enough. Many studies have shown that regular screening with the Papanicolaou (Pap) test is linked with dramatic reductions in cervical-cancer deaths. While existing research has found that Hispanic women tend to not get regular screenings, there is limited understanding of the potential barriers to detection, treatment and prevention among this population.

What is unique about this multi-level research approach is that it will also consider the community-level impacts. For example, if there is not enough information about Pap tests available to women within their community, and limited access to local health services, there is a very low possibility of early testing for cervical cancer.

“The goal is to understand why Latinas are not getting screened, and to develop strategies to improve the health storytelling network of their communities. Our ecological approach can help this research have a broad impact in the Latino community,” Gonzalez says.

The American Cancer Society recommends yearly Pap screenings for women aged 21 to 30. Women over the age of 30 that have had three abnormal tests in a row are recommended to be screened every two to three years. Taking early steps is crucial, about 90 percent of women whose cervical cancer was detected by a Pap test survived.

According to a special report by the President’s Cancer Panel published in USA Today, “the U.S. urgently needs to expand research and improve understanding of cancer among minority populations.”

As the Latino population grows in Los Angeles and other major cities across the country, it will become even more crucial to understand health disparities and barriers for healthy living among minority communities. The team of faculty members and graduate students is committed to producing quality research that can be used to develop effective health communication strategies that can ultimately help save lives.

USC is taking the necessary step so that women can continue to fight on! This is an under examined epidemic, and researchers say the frequency of cancer among minority populations is projected to nearly double over the next 20 years.

Hopefully these USC Trojans will begin a domino effect that will have different universities across the country addressing this occurrence and taking action.