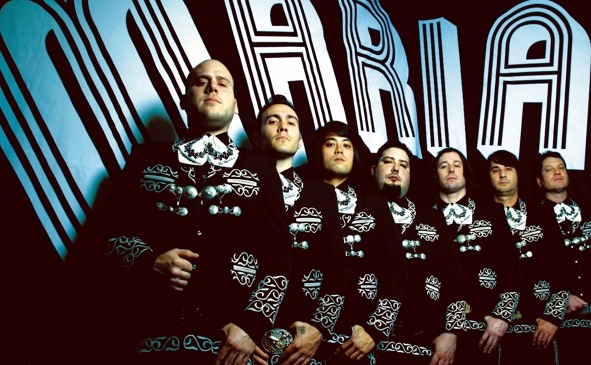 ATO Records will release Mariachi El Bronx (II), the second full-length studio album from Mariachi El Bronx, the alter ego of acclaimed Los Angeles-based punk outfit the Bronx, on Aug. 2. Mariachi El Bronx was conceived in 2006 after the Bronx was asked to perform unplugged on Fuel TV. Believing that nothing sucks more than rock bands playing acoustic songs, they adopted another style of music endemic to Los Angeles and more suited to an acoustic performance: mariachi music. The experience unearthed something unexpected, what the band likens to discovering a “second soul” within.

Now with Vincent Hidalgo, son of David Hidalgo of Los Lobos on board as a full-time member and because of guests like the all-female mariachi ensemble Reyna de Los Angeles, Mariachi El Bronx (II) bristles with intensity, drama and emotion – hallmarks of both mariachi and punk music. And for a little icing on the tarta, Dave Grohl likes them too; Mariachi El Bronx is currently on tour with Foo Fighters and shows are scheduled at the Forum on Oct. 13 and 14.

Producers have announced that the New World F.E.S.T., a new breed of eco-festival taking place Oct. 7-9 at the beach in Santa Monica is offering two primetime full-paying gigs exclusively to indie artists. To be considered for the gigs, bands must apply by submitting their EPK (Electronic Press Kit) through Sonicbids at sonicbids.com/thenewworldfest on or before Sept. 16. All entries will be juried and rated with two winners chosen to play before thousands of eco-friendly festival-goers. Winners will be announced on Sept. 26. The festival will also feature film screenings, guest speakers, seminars and panels and lots of food. More information is at thenewworldfest.com.

Matthew Herbert will release the controversial and much-anticipated album One Pig on Oct. 11 on his own label, Accidental Records. The album was made entirely from recordings of a modern pig’s life cycle from birth to plate and aims to listen in on a single farm animal’s life in the context of an otherwise-anonymous food chain.

PETA has gone hog wild over the release, claiming that Herbert is exploiting animal cruelty for the sake of entertainment, and there’s also a Facebook campaign seeking to prevent the release of One Pig. The fact of the matter though is that all Herbert did was make field recordings of the pig’s birth, a lifetime of activity and ultimately its being butchered for meat and then take those recordings into the studio to be turned into art. Herbert is also known as Doctor Rockit, Wishmountain and Radio Boy, and he has produced or remixed for the likes of R.E.M., Björk, John Cale, Roisin Murphy, Yoko Ono and Serge Gainsbourg.

Universal Music Enterprises has announced the upcoming release of a 20th anniversary edition of Nirvana’s highly-influential recording Nevermind. The four-CD/one-DVD Super Deluxe Edition of Nevermind drops on Sept. 20 and will include previously unreleased recordings, rarities, B-sides, BBC radio appearances, alternate mixes and rare live recordings. The DVD will hold an unreleased concert in its entirety. The original Nevermind release has sold more than 30 million copies worldwide.

The entire catalog of legendary Brit-pop band Suede, also known as the London Suede, is being reissued with bonus material appended.

The band’s frontman Brett Anderson says of the five new packages, “This is the definitive collection of pretty much everything we released in 14 years together, and some stuff which we didn’t. It’s all re-mastered and includes unreleased, never-before-heard oddities and gems which even I’d forgotten about. It’s the complete audio history of a band and, like any band of interest, it’s flawed, strange and sometimes beautiful.”

The reissues are dropping every two weeks; debut album Suede, Dog Man Star and Coming Up are out now while Head Music and A New Morning drop in August.

With a lineup that bridges the gap between local phenomena and big-time national acts, the Sunset Junction Street Fair has been lighting up the summers of East Los Angeles locals for over 30 years now. This year, the event will offer even more to the local scene as Sunset Junction has teamed up with the infamous El Cid Flamenco Club in Silverlake to provide a sixth stage dubbed the Locals Only Stage, celebrating the homegrown talent of the East L.A. area. —Patrick Meissner