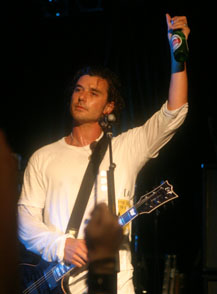 Untitled Document You’re only as good as your lead singer’s last album, so when the front man of your new band is Gavin Rossdale, Bush’s former lead vocalist and guitarist, that’s definitely a good jumpstart to a solid reputation. But as soon as a musician starts a new act, the entire band has to deal with the expectations of old fans. However, Institute delivered music fans both new and old could rock out to. The group (which also includes ex-Helmet guitarist Chris Traynor) was even willing to put aside their individual egos by shocking veteran fans with a few classic Bush tracks like "Glycerine" and "The People That We Love."

Although the audience chanted the name of one man ("Gavin! Gavin!") long before the show began, by the time the set finished everyone remembered what band they really paid to see. Suddenly, the chants changed to "Institute!" as the foursome played songs from their upcoming debut album, Distort Yourself (due out Sept. 13), and proved they are much more than "Gavin’s new band."

In fact, there is only one reason fans may accuse Institute of being Bush impostors: the sexy sound of Rossdale’s signature voice. When the alluring tone of his deep, raspy vocals spills into the mic, it immediately triggers your mind to replay flashbacks of some of your favorite (or not-so-favorite) Bush songs heard back when the band’s tracks were in heavy radio rotation. But once you recognize Rossdale’s voice, you’ll also notice that the beats backing it pound harder than the Bush style you may have been expecting.

Several of Institute’s tracks, such as "Secrets and Lies," evoke a feverish restlessness, as if the songs were designed to be moments spent basking in the thoughts of everything that pisses you off. And it was obvious the fans were eager to relate – even guys that appeared to be both rugged and macho came to the show ready to recite some of the romantic lyrics, especially when Gavin repeated the line, "To lose you is to never love again."

Institute can still be classified as modern rock, but they laced the crowd with a variety of slow, sensual grooves like "Ambulances" and "Wasteland." Yet the heart of every track was filled with blazing emotions and each song on Institute’s set list seemed to follow a carefully constructed formula. The verses often contained light sounds that emitted the feeling of an intense anger brewing beneath the surface of the band’s calm demeanor. As a release to the mental chaos displayed throughout the verses, Institute used the choruses as their opportunity to explode on stage like a grenade that lost its pin. Remember the breakdown of Bush’s "Cold Contagious" where Gavin consecutively repeats "You will get yours" more than five times – his voice and the bass line growing harder with each sentence? That same volcanic emotion on the verge of eruption set the scene for Institute’s virgin Roxy performance.

It can also be argued that a band is only as good as the lead singer’s wife’s last album – that is, when the wife in question happens to be Gwen Stefani. Luckily, Mrs. Rossdale’s reputation remains intact since her debut solo album, Love. Angel. Music. Baby., is still topping the Billboard charts. To the ecstatic surprise of Institute fans, Rossdale’s infamous wife strutted into the VIP area dressed in full rocker gear looking ready to support the talent of her husband and his new bandmates.

When big names like Gwen and Gavin cruise through a small venue like the Roxy, it’s easy to enjoy the show. But there’s no denying Institute put on a concert that featured sounds just as good as Bush’s last album, if not better.