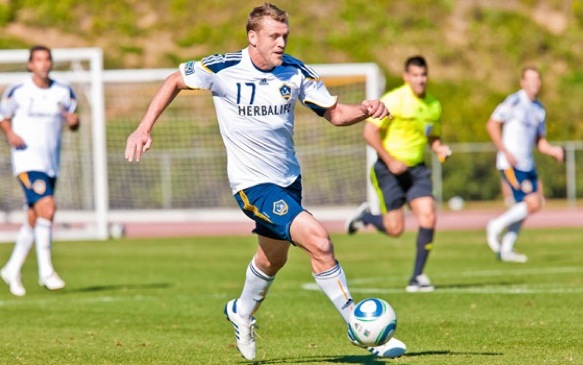 The Los Angeles Galaxy’s unbeaten streak improved to 14 games with a dominating 4-0 victory over the Vancouver Whitecaps FC in Canada on Saturday before a sold-out crowd of 27,500. Vancouver’s Empire Field witnessed its biggest audience ever for an MLS match, though it arrived and departed in disappointing fashion for the host. With the win, Los Angeles’ record moved to 12-2-9 for the year with a total of 45 points, which is a league-best and good enough for first place in the Western Conference thus far.

“I thought our team played very well for 90 minutes. The first half, both teams created chances, but we took control around the 30 minute mark and had a very good second half,” L.A. head coach Bruce Arena says. “Landon’s goal broke Vancouver’s backs. It was a very good day for the Galaxy.”

Midfielder and team captain Landon Donovan not only scored once, but twice and then assisted on another. Donovan struck his 10th goal of the season in the 61st minute after defender Sean Franklin delivered a chopped ball into his run. The Inland Empire-native then chest trapped the leather in front of him and once in the box, he finished with above-par class in a left-footed curled shot.

“To go a goal down against these guys, it’s sort of their bread and butter – you knew they were going to pack up shop,” former Galaxy player Peter Vagenas tells the media after the game. “We came in and changed our tactics a bit, and again gave up – and this is not to disrespect anybody on this team – we gave away three amateur-level goals. The second, third and fourth ones.”

Donovan gives his thoughts on the initial score, which propelled the Galaxy to gain momentum and net more goals.

Fourteen minutes after at the 75th minute mark hit, Donovan scored his 11th off a well-executed penalty kick; he is now a perfect four-for-four on PK conversions. Currently, Donovan is tied with New York Red Bulls’ French striker Thierry Henry with a league-best 11 scores. For the sixth time in his 11-season MLS career, Donovan has reached double figures in goals.

“We were a little fortunate with the penalty, but we knew if we were smart and we passed the ball we were going to get a number of chances, and it was just about making sure we finished them,” Donovan states.

Los Angeles’ scoring did not end there. Franklin, who last week netted his first MLS career goal, collected another against Vancouver. In the 80th minute, defender Todd Dunivant connected with Donovan, who raced into the box and near the end line before releasing a rapid-rolling pass for Franklin.

Franklin, who last year had a career-high six assists, suggests the first half of play was scoreless because Vancouver’s stadium and crowd made an impact.

“The first half we were adjusting to the turf, and Vancouver came out flying,” he remarks. “The first 15 minutes they were really coming at us, but we started to get better towards the end of the first half.”

Forward Adam Cristman finished the scoring in the 90th minute mark with his first season goal, which came unassisted in a hustle play that saw him fight and head the ball past former Galaxy goalkeeper Joe Cannon.

For the affair, Puerto Rican-American goalkeeper Josh Saunders made three saves and earned his fourth shutout this 2011 campaign. In 23 games this season, the Galaxy has gathered 12 clean sheets. Jamaican Donovan Ricketts, who is injured, leads the team with six.

Los Angeles continues its two-game Northwest road trip with a stop in Portland on Wednesday, Aug. 3, as they visit the Timbers at JELD-WEN Field at 7:30 p.m. Soon after, the Galaxy host FC Dallas on Saturday, Aug. 6, at 7:30 p.m. at the Home Depot Center in Carson.