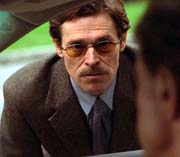 Willem Dafoe was not originally on the list for the part of Arnold Mack, the disgruntled ex-employee turned kidnapper of Wayne Hayes (Robert Redford), in the new thriller The Clearing. All that quickly changed, though, when he got hold of a copy of the script.

"It did surprise me that it’s not a linear narrative," says Dafoe. "[I thought] that this is not written by a screenwriter; it’s very fresh and lean, very direct and detailed — so spare. It just jumped out at me. I asked to meet the director (Pieter Jan Brugge), who wasn’t thinking of me, but I lobbied him. We talked about it and I made associations with it.

"On the surface the character is very bad," Dafoe continues, "but he’s struggling with the ugly end of the American Dream — that if you aren’t happy, aren’t successful, it’s your fault. I find that particularly American."

Brugge agreed and was impressed by Dafoe’s ideas. "It wasn’t what [Dafoe] said about the role, but about himself. That he had made a connection," says the director. "It was the first time I had seen that in all the actors I had seen."

With first choices Robert Redford and Helen Mirren already attached, Dafoe made the cast complete. Dafoe didn’t feel that he was once again being cast as the villain, however, but looked at his character as an outsider. According to the versatile actor, it’s a role that he feels he regularly takes in order to avoid being typecast.

"You have to feel a sense of compassion for villains or they’re cardboard characters," explains Dafoe. "[Outsiders] are less protected, more fluid. There’s more transformation or change possible."

In The Clearing, Arnold takes Wayne up into dense forest and says that there is a cabin that exists, where he is to deliver him, but it’s not quite as simple as that. As the two men begin to talk, they learn a little about each other and their opposite lives.

"[The story had] a darkness, but a darkness that was intelligent. It had elements of the American Dream and how it can be changed in a nanosecond," says Redford, explaining why he chose the story. For Dafoe and his character, however, it was very different.

"[Arnold] basically felt impotent and wanted to control the situation completely," explains Dafoe. "In the film, he talks of a new day being like an act of creation — he felt very out of control in his life."

Director Brugge is also an experienced producer (he was nominated for an Oscar for The Insider), but acting as a first-time director also proved an interesting part of the mix for Dafoe.

"The material was very personal to him (suggested by a true story in his native Holland) and, as a producer, he was very organized," Dafoe recalls. "There was a strong script and strong actors, and he was obsessive and possessive. But if anything, [the only drawback] was temping his obsessions about making the day."

This must have been difficult when Dafoe — on the first take of his big fight scene with Redford — cracked his sternum.

"I was quite surprised," Dafoe admits. "It takes a lot of force to do that. A stunt double fell on top of me. I felt some tightness, but we had to keep going — there was no choice. You have to shoot a lot of material so you can sell the punches … you soldier on."

The Clearing releases in theaters July 2.