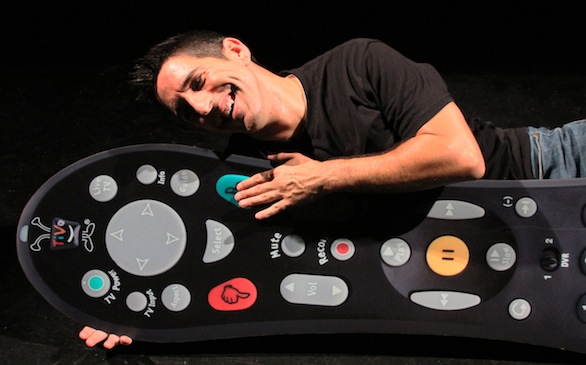 “Awake,” which is now playing at the Bootleg Theater in Los Angeles until Aug. 20, is a new solo show written and performed by Hernandez-Kolski himself. A lot of the ideas behind it have been supported by developer and director Benjamin Byron Davis, who has worked with Hernandez-Kolski in the past. Their solid working and personal relationship is depicted in this daring solo show.

With one of the most creative, yet imaginative beginnings that theater can have, “Awake” starts with sexual humor. While experiencing oral sex, Hernandez-Kolski  thinks, talks to himself, continues to think and then speaks to his partner, but then the thinking continues. Absolutely hilarious!

Technology and self-reflection are illustrated in “Awake” as well, but Hernandez-Kolski  executes this to perfection while performing jokes and saying truthful elements regarding Facebook. But where Hernandez-Kolski succeeds most is when he connects with the passing of his beloved mother throughout an honest, but vigorous awakening of emotions.

Humbling and socially fulfilling, “Awake” also contains scenes of hip-hop and break-dancing while continuing to touch the hearts of the audience through comedy and drama. “Awake” is almost a complete autobiography of Hernandez-Kolski, who carries the title of actor, writer, def poet and Emmy-Award winner.

One of the unexpected parts of “Awake” lies with the surprising change of wardrobe in front of the public on stage, as Hernandez-Kolski removes his casual shoes, jeans and shirts and instantly transforms into the business man.

Hernandez-Kolski, a Chicago native who is of Polish and Mexican descent, is a graduate of Princeton University and currently resides in Los Angeles. Consequently, “Awake” is an ideal piece for the college student, as he deeply resonates essential topics of the collegiate life, culture, growth and entertainment.

“Awake” is a daring thrill.