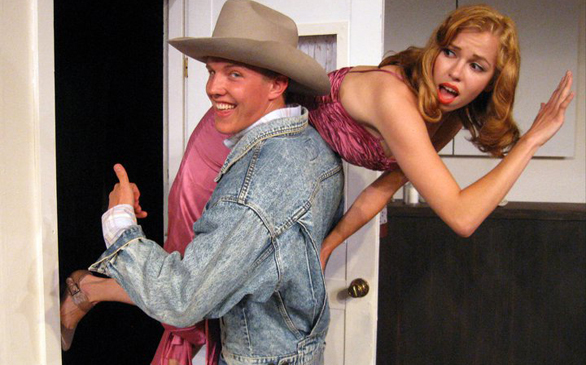 I love the play “Bus Stop” by William Inge. Set in 1955 Kansas City, Mo., a bus carrying a group of amusing and strangely dynamic characters is forced to stop at a diner to wait out a horrible snowstorm. The audience soon meets Cherie (played by Jessee Foudray), an aspiring countrified nightclub singer; Dr. Lyman (an amusing performance by David Kunzle), the alcoholic professor smitten with Elma (Janet Lee Rodriguez), the young, open-eyed waitress working the late-night shift at the diner. There’s Grace (Valerie Ruel), the owner of the diner who can’t resist seeing a good fight or the touch of a man; Carl (Neil Engelman), the bus driver secretly fooling around with Grace; Bo (Sam Hambrecht), the dimwitted cowboy infatuated with marrying Cherie; and finally, Virgil (Andy Grosso), Bo’s smarter sidekick.

It is the dialogue between these people that makes this play so hysterical and so much fun to watch. Unfortunately, the Kentwood Player’s production was a letdown. It was amateur at its best. It felt more like watching a bunch of vignettes within the show and not an ensemble working together.

The energy, with few exceptions, was too weak. The actors’ diction was not always clear and made it difficult to understand what they were saying.

The set design by Max Heldring Storme’s was lovely and depicted a 1950s diner quite well. If only as much detail went into the performances – what a stronger production it could have been.