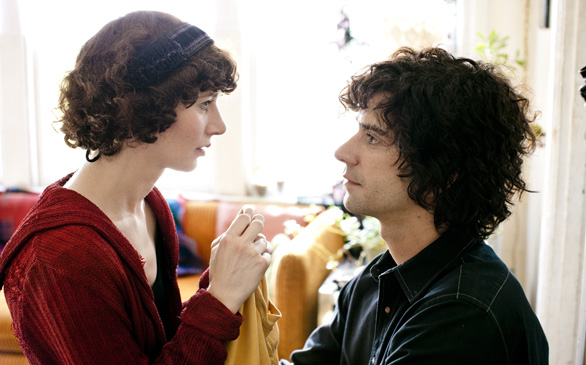 The Future stars Miranda July as Sophie and Hamish Linklater as Jason. They function as a couple who have been together for four years and are in the process of adopting a cat that they have to wait 30 days for because the cat’s illness needs tending to by the clinic from which they will be adopting it from. The cat serves as a narrator, and it expresses its discontent on living outside as well as its gratefulness for the adoption. Sophie works as a dance teacher while Jason works as a technical support operator out of his home, but those two jobs are quickly thrown out the window once the couple realizes that they are adopting a pet; the cat works as a metaphor that ties the whole story together.

The movie was directed and written by July, who wrote and directed the critically acclaimed Me and You and Everyone We Know, displays her tremendous capability for performance art again in this film. She is consistently displaying her dancing capabilities and her character’s quirkiness shines throughout, but it leads Sophie into trouble in the end. The film has a sexual tone to it that draws the viewer deeper into Sophie’s flaws that become Jason’s challenge.

The challenge becomes apparent after Jason purchases a piece of art from a gentleman whom he meets in the clinic. A phone number is written on the back of the sketch that the person who purchases the art can call in case they want to return it which confuses the audience at first until the story unravels. It unravels beautifully. It beautifully points out the fragility of humanity by using the cat as reference to compassion towards another.

The couple faces challenges after shaking things up in their own lives because they feel a need for change, which is for better or worse depending on how the audience sees it – and that’s the beauty of the film. It leaves the audience with a thought of either satisfaction or disgust because of the way Sophie veers towards another man and away from Jason. Time is a factor in this picture with Jason having the ability to stop it, but not the ability to change what happens in the future, hence the flexibility of the plot.