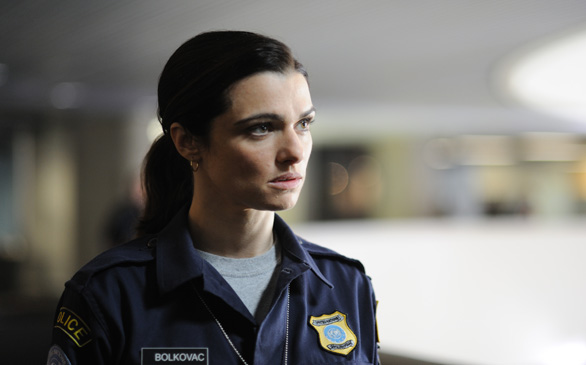 Human trafficking is one of the most prominent crimes that is executed throughout the world, and this film depicts a story in which a police officer from Nebraska, Kathy Bolkovac (played by Academy Award winner Rachel Weisz), is sent to Bosnia on a peace mission as a peace officer, or peace monitor. The United Nations contracts with security firms to maintain or ensure the development of a war-torn country, which was the case in Bosnia. The movie is a true story that was written and directed by a Ukrainian who was born in Canada, Larysa Kondracki. This is her directorial debut, and she does the job rather well.

The movie tells of Kathy’s life being torn apart due to a divorce. She is left with the challenge of finding a position as an officer so that she could be close to her daughter but ends up taking a job in Eastern Europe with a private security firm from the U.K. called Democra, lured by the fact that she could make $100,000 in six months.

The requirements of the job are just a high school diploma and some training that is similar to the requirements of becoming a firefighter. Her superiors in Bosnia are impressed with her work and promptly promote her to the position of captain, and that is when she encounters the truth of the matter. The country may have ended the war, but there is strife nevertheless.

One of the first investigations done by Kathy features a Muslim woman who is abused by her husband. The husband is convicted in court by a judge, which leads to Kathy’s prompt promotion.

She is mentored by the head of the Women’s Rights and Gender Unit, Madeleine Rees (Academy Award winner Vanessa Redgrave), but the limitations of the relationship are quickly determined when corruption in the inner circle is unearthed. Enter the Internal Affairs officer who is played by Academy Award nominee David Strathairn. He encourages Kathy’s investigation, so she begins to conduct raids of bars where females are kept in dark and filthy rooms while working as waitresses. They would work in these bars before being picked by male patrons to perform a service. The women apparently must pay a debt, although the reason of the debt is not fully disclosed in the movie.

The film is sharply edited because of the different stories that are being told. The audience can clearly see the mental struggle of Kathy throughout, but there are moments of awkwardness when encountering the other peace officers involved in the corruption. Weisz plays the role well in showing the raw emotion involved with the investigations that tie in with her own personal war with her ex-husband but seems to struggle with the character's aggressiveness at times.

This is a movie that must be seen because there are currently 1.2 million people who are being trafficked, and it also gives the audience a glimpse into the frail diplomatic operations of the United Nations. It’s a thriller with a dramatic sense to it.