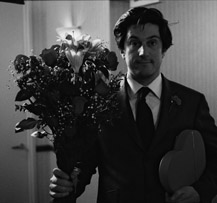 In Sleepless in Seattle, as with most romantic comedies, there’s that guy who the main character leaves in order to be with their one true love – that love the audience had been rooting for them to be with the entire film. But Michael Showalter, writer, director, one-third of Comedy Central’s "Stella" wondered, "What would happen if instead of watching Meg Ryan and Tom Hanks fall in love, we stayed with Bill Pullman’s character, the man Meg Ryan leaves behind." Showalter says he really loved Pullman’s character and was disappointed to see him go. "I really identified with his struggles more than with the too-good-to-be-true Tom Hanks hero. I wondered what happened to him. And all those guys left at the altar." And thus, The Baxter was born.

Showalter defines a Baxter as "Mr. Wrong. A compromise to ‘true love.’ The epitome of settling." In his new feature of the same name, the writer/director/star plays the etymological root of Baxter, Elliot Sherman, a mealy-mouthed tax accountant who’s always been afraid to take a risk, even settling himself on a beautiful woman (Elizabeth Banks) when he should obviously be with the equally bookish Cecil Mills (Michelle Williams) – they both read the dictionary for fun.

Inspired by films of the 1930s and ’40s, Showalter aims at a romantic comedy for the common man, not rooted in the gross-out humor found in so many films nowadays. "Comedic films of that time – Howard Hawks, Ralph Bellamy and Billy Wilder – were directed like plays. For instance, there’d be like 10 minutes to a scene before they called cut. It was a bedroom farce, but they never had to be too overtly sexual like films of today. I love those old movies. They had a certain purity to them."

He reinforces this – and his own Baxterness – by admitting that he’s not the perfect Baxter. "Jimmy Stewart would have been the ideal person to play the Baxter," he says. "He’s the ultimate Baxter leading man. He was a Baxter. Just the nicest guy." And sometimes, Showalter says, nice guys finish first.

This certainly seems to be the case for Showalter himself, who never planned on directing or starring in The Baxter, "though deep down I always wanted to," he says. The multi-hyphenate, who has had a string of successes (with co-writing/producing or directing credits on The State and Wet Hot American Summer and roles in Kissing Jessica Stein, Signs and Sex and the City) apprehensively took on the job, though he says, "Convincing me to direct was easy. Playing Elliot was more of a struggle. I had envisioned someone a bit better looking in the part." So might audiences, but it’s nuanced realities like this – Wow! Not every leading man resembles Brad Pitt or John Cusack – that make The Baxter so appealing. Showalter even eschews labeling it a romantic comedy, saying that there’s "just as many subtle attempts at sweetness as jokes."

For a first-time director, Showalter juggles the two genres with a circus-like bravado, tossing out a girl-gets-guy moment then following it with a colorful guy-kicks-girl’s-ex-in-ass scene. "I looked for ways to always defuse the tension," Showalter says of the scene that could have easily needed some wine with its cheese. "I wanted the audience to be let off the hook. So it wouldn’t be too schmaltzy."

Elliot says in voiceover in the film that his grandmother coined the term "Baxter," but one has to wonder if Showalter himself is the origin of the neologism. Showalter smirks, "The Baxter is universal, but, yes, he’s also a reflection of myself in many ways. But!" – he’s quick to note – "there’s a little bit of Baxter in everyone."

The Baxter releases in theaters Sept. 2.