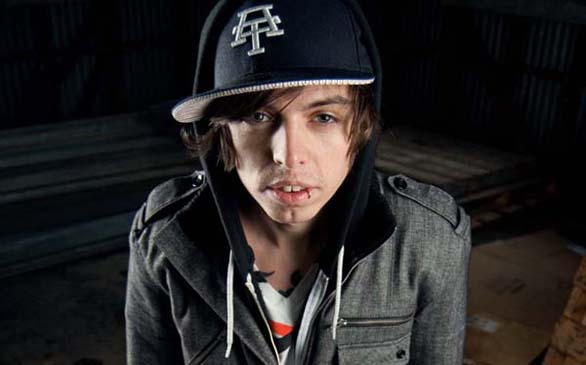 With his signature shaggy hair, lip piercing, tattoos and what could almost pass as a southern drawl, Benjamin Laub, better known by his stage name of Grieves, looks every bit like he would be at home in a Warped Tour crowd, but it’s not easy being a hip-hop artist on a giant “punk rock summer camp.” Spend two months surrounded by a bunch of dudes in tight jeans, cowboy boots and full war paint, it would understandably be a struggle for even the most seasoned of rhyme-slingers to not go into culture shock. Luckily, Laub is no stranger to turning audiences’ preconceived notions on their heads, though this summer marks new territory as he does it outside of the hip-hop world.

“We’re so used to touring in the hip-hop world, and now we’re dealing with a different kind of touring and a different kind of animal we’ve never partied with before,” says Laub with a laugh. “I don’t know if I could do it all the time, but it’s definitely showing me a different dynamic to the world we’re in.”

Though he’s been making a name for himself lately in the hip-hop circles, Laub admits that Warped has reawakened the spark of his early days of trying to break out.

“You’ve got kids here who only want to listen to metal or pop-punk and actively do not want to listen to hip-hop, but the fans we do sway, I feel like we’ve got them forever. We get to introduce them to hip-hop, and there’s a really happy feeling in that for me. They didn’t want to like it, but they found out they love it,” he says. “It’s not like watching a Day to Remember where they’ve got 10,000 kids singing along to them, which is awesome, but if we get to walk with 300 of them a day, that’s sick.”

Rediscovering his inner salesman, Laub isn’t too good to chat up show-goers and flyer up a venue himself to spread his word.

“I’m chasing people down, I never do that,” he says with a laugh, “but it feels good to be working.”

The fact that he’s found quite a bit of success so far with an audience demographic that isn’t his usual one might stem from the fact that he understands the concept of interactivity better than artists who are decades his senior, both in hip-hop and in rock.

“It took me a day to figure out how to connect with these kids,” he says of his first exposure to Warped crowds. “You can’t just be ‘rap-rap-in-your-face-rap.’ They don’t want that, they want that personal experience.”

It was this unique understanding of both musicianship and performanceship that found Laub a home on Rhymesayers, where he collaborated with label mate producer and DJ Budo for his debut full length, this summer’s Together/Apart. A mix of retro soul from yester-decade and the modern real-talk lyricism that his label is known for purveying with their artist roster, the album is the culmination of all the firsthand experiences Laub drew from for its inspiration. “Together/Apart was the album we wanted to make for a really long time, I’m super pumped about it,” he says.

While the rest of hip-hop is better known for posturing and machismo, Laub opted to go a very different path with his music and the album, with lyrics that read more like diary pages than a sales pitch.

“It’s what I was going through at that point. It was an interesting part of my life,” he says. “We were touring so much, I wasn’t home, wasn’t getting to be around the people I was used to being around.”

Jokingly, he adds, “It got real,” though the emotional weight of his statement isn’t completely hidden, either.

Even within the more indie hip-hop circles, introspection is often still a rarity, but Laub doesn’t know any other way to write or perform.

“It feels good, because I’m not going to talk about it otherwise. Music has always been my release,” he says.

He may be the stylistic odd man out on a tour of post-punk rockers, metalcore thrashers and dance-pop party-makers, but one thing Grieves has in leaps and bounds over many of those other bands is a commitment to his DIY work ethic. And really, what’s more punk rock than that?