Kimberly Cole: Comes From the “Heart” 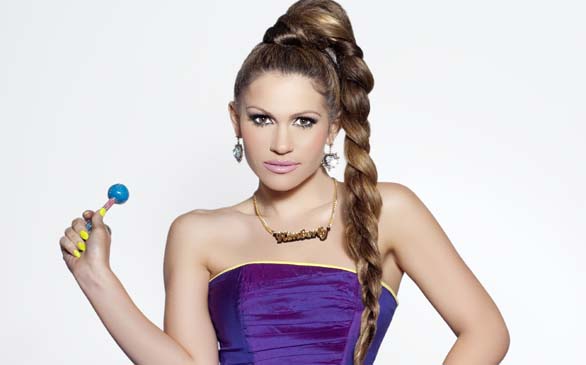 Kimberly Cole started performing early on in her life, singing while toying with instruments as a baby then evolving as a pro-skater when she was in school. She was born and raised in Orange County by her mom who is a principal of a school in Garden Grove and her father who is a dentist.

“When I skated, I didn't realize it was a sport,” she says with a bubbly attitude. “I was known for my performances. I’m a competitive person. It’s morphed into what it is today.”

Cole started out skating to classical music but switched over to acting in commercials as well as television shows and films such as Bring It On and Van Wilder before getting in front of the microphone to sing.

“I’m an actress but a singer first. Acting is my number one thing,” she answers when asked what she considers herself as foremost.

But she ultimately believes in “making a positive difference,” hence, writing the dance hit “Smack You” which reached No. 4 on the Billboard Dance charts a few weeks after it was released. It was written after she witnessed a girl getting bullied while she was in school and is an expression of her desire for people to stand up for themselves in order to prevent their own victimization.

Having fantastic support from her parents certainly led to her current success as a performer, and that support helps her remain grounded.

“It’s all about curves every day. I think that’s what life’s all about. Music can help you through those curves.”

Her first album was released in 2010 with good reviews and a good response. It was incorporated into a reality show called “Bad Girls Club” on the Oxygen Network, which was a unique deal. Along with her team, Cole decided to “do it backwards” and build “it on our own with Twitter.” Utilizing such social media sites has worked. She currently has 1,371,048 followers on her Twitter. That is quite a number of followers considering that she has not reached the peak of her career yet.

When I asked her about how she felt about headlining for one New Year’s Eve concert she reveals, “To be able to headline, it was amazing ... it was dope.”

What makes this particular artist unique is her hands-on approach to the creative process. Creative control is her desire, but she also interviews other artists, which gives Cole insight into the creative process. Her deals with X Music Network and MTV as a hostess for shows and as an interviewer have given her the ability to see the other side of the coin.

“Hands-on is the best way to be,” she says about the process of climbing the ladder of success in the entertainment world. “You learn so much.”

Being completely involved in the creative process certainly gives the artist a first-hand look and a unique perspective on which direction to go with her own music or with other projects. What compels her to express herself is the need to bring out the fire in other people, and the audience certainly does since her choreography on stage is completely engaging.

Being a back-up singer for Katy Perry and then garnering an opening slot for her has propelled Cole to her current status, but she’s going for the gold. She likes to train and will rehearse for eight hours before putting on a show. She is now planning a tour that will include skating incorporated into the choreography. Cole is also focusing on the singles market now and has just released a song called “Arrow Through My Heart” via the Internet. It was produced by Eddie Amador and features Garza. It is her first dub-step song and has riveting beats.

Her desire in the future is “writing an album that is a musical journey,” but she will make waves on television and in clubs as well as the dance charts with her singles for the moment because she loves to “stay on top of everything.” The current state of the music industry is evolving into something else than what it was decades ago, and artists like Kimberly Cole will point the direction of the evolution.