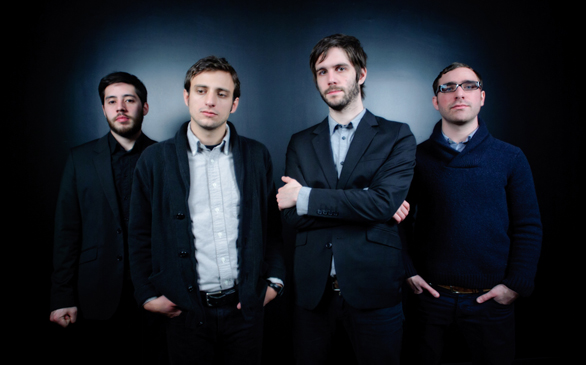 While being a post-hardcore art-rock band on Warped might not present as big of a challenge as being, say, one of the lone hip-hop emcees on the tour, being in a band whose greatest strength is their ability to create a sonic mood does have its own unique challenges.

“That was something we realized the first day, it’s really hard to get that atmosphere of being in a club out here, so we had to rearrange our set a little bit,” says drummer Nicholas Pizzolato. “You have kids walking by and you want to be playing the higher energy stuff that’s going to grab their attention. We’d like to play some slower stuff but … it’s kind of tough with people’s attention spans,” he laughs.

“We’re saving the stuff that creates more of a mood for when we come back on a club tour. So it’s like getting two completely different sets in the same city,” jokes guitarist Frank Graniero.

Joined by vocalist Greg Dunn and bassist Mitchell Lee, the New York-bred foursome have been on the receiving end of a good amount of buzz lately for their latest full-length, Waves.

“It’s a lot like our live show. We wanted it to be like a live record, and it’s the first full-length all four of us have done together,” says Pizzolato, though the band has ironically taken a more 3.0 approach to long-distance songwriting.

“We all kind of demo on our own, with Greg writing a lot of the songs and bringing us really stripped down stuff. A lot of it is done through sending demos online, then when we decide to record, that’s when it comes together,” he says.

While the band is of a consensus that Waves is a much greater representation of the members’ collective influences, just who those influences are is a vast and varied range of artists. Citing everyone from Saves the Day, Glassjaw and Thursday to the National, Ellie Goulding and Lady Gaga between them, sonically pinning them to said influences might be an impossible task. A brief but knowing pause at the realization of their frankensteinean hodgepodge of a list, and Pizzolato adds, “…We also listen to a lot of stuff that sounds nothing like us.” Just in case anyone was getting the wrong idea.

Just as with their musical selections, however, there is a clear sonic dichotomy to be heard on Waves, which is half dreamy jam session and half hard-rocking mosh anthem. Controlled intellectual lyricism and vocals balanced by chaotic and unpredictable instrumentation, having garnered them comparisons to some of the best post-punk bands of the past and present. Masterfully emotive, often even without the need for lyrics in order to be as much, the album showcases the band’s commitment to artistry instead of gimmickry. Of course, that isn’t always an easy path to take, however.

“I’m proud of it, but in an environment like this, it’s tough sometimes to be that way,” says Pizzolato of being the legit fish in the illegitimate pond. “I don’t want to fit into that gimmick niche, but less kids see us, less kids buy stuff and no one’s heard of us. But that’s why we’re doing this, we’re hoping to get people who have never heard us before.”

To be fair though, just because they don’t ascribe to any blatant trends doesn’t mean the band is free from criticism either. What does a highly skilled band like Moving Mountains get ripped for, you ask?

“We mostly get shit for the way we dress,” says Pizzolato with another laugh. “We had a dude who at the Pomona show who came up to us and said, ‘You guys are like a bunch of preppy dudes rocking out on stage!’”

Luckily, the very normal and down to earth foursome has built up a pseudo-support group of similarly minded and similarly talented bands amid a scene of extreme personalities.

“We’ve all kind of been gravitating towards each other because we all realized we were like, ‘Where the fuck are we?’ We have a little family going.”

With strength in numbers, there just may be hope for their scene yet.