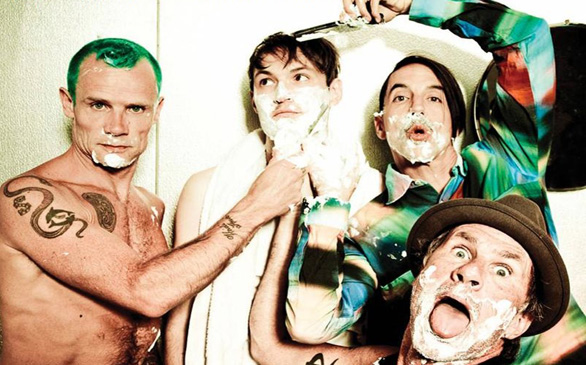 “That my career is something I believe in with all my heart is an incredible gift,” says Flea. “To direct the energy of that work to help out the school which I also believe in with intensity and have nurtured for the past 10 years is a transcendent double doozy of greatness. We are going to rock our balls off for the Silverlake Conservatory of Music, like a pack of wild animals!”

The conservatory is a non-profit organization that offers the people of the Silver Lake area the opportunity to study music with exceptional teachers at a reasonable price. The band’s 10th studio album, I’m With You, drops on Aug. 30.

Mötley Crüe will be this year’s recipient of the Elmer Valentine Award, named for the late co-founder of the Whisky A Go-Go, to honor their contributions to the history of the Sunset Strip. The ceremony will take place on Aug. 18 at the House of Blues Sunset Strip and will officially kick off the Sunset Strip Music Festival that runs through the 20th.

“It’s an honor to be recognized by the Sunset Strip Music Festival,” says Mötley Crüe drummer Tommy Lee. “It means a lot to us that we are recognized for our contribution to this historic place.”

Mötley Crüe got their start on the Sunset Strip, as they performed many nights at the Whisky A Go-Go and the Roxy Theatre. The band also filmed their “Kickstart My Heart” video at the Whisky and for a while lived just up the street from the venue on Clark Street, making the Sunset Strip their official home. The city of West Hollywood will also be honoring the band on the 18th.

Mutemath has announced that their next album will be called Odd Soul and will drop on Oct. 4. The band crafted the album over a six-month period where they locked themselves down at the New Orleans home studio of singer Paul Meany, not emerging until they were ready to play the finished music for others.

“The idea of complete isolation was the only thing that appealed to us,” Meany says. “No camera guys, no producers, no engineers, no record label people, no management. No one would hear or comment on what we were doing until we were done.”

Mutemath will introduce the songs from Odd Soul at a special performance at the Troubadour Aug. 16.

The Power of the Riff

The lineup for the second annual all-day the Power of the Riff festival has expanded, adding Eyehategod, Black Cobra, Baptists and Seven Sisters of Sleep. Also on the bill will be Pentagram, Winter, Pelican, Trap Them, All Pigs Must Die, Acephalix, Skin Like Iron, Masakari, Alpinist, Aeges, Early Graves and Slave. The marathon takes place at the Echo and the Echoplex Aug. 13.

Venice band Terraplane Sun has had tons of success getting their music played on television; “Nurse Jackie,” “Damages” and “The League” have all featured the band’s music, and the new A&E show “Relapse” uses the Terraplane Sun tune “Trouble” as its theme song. Now the five-piece blues/folk/rock band has one more thing to howl about – their new album Coyote. The band will play some of the new music live at the Echo Aug. 11.

The FYF Fest returns to downtown Los Angeles this Labor Day weekend with a 12-hour event scheduled to take place at 1st and Main near City Hall on Sept. 3. The fest will operate a bit differently than last year in an effort to avoid some of the issues of the 2010 event; there’ll be multiple entrances including a separate VIP entrance, three times the food of last year will be on hand and cheaper prices are promised. No Age, the Dead Milkmen, Four Tet, Simian Mobile Disco, Guided by Voices, Death From Above 1979 and the Descendents are just a few of the dozens of acts slated to appear. FYFFest.com.