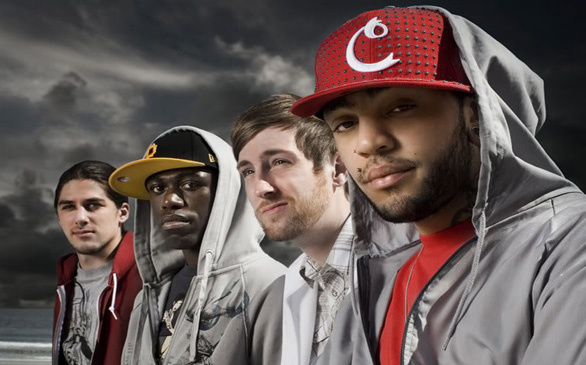 Just in case you didn’t get enough face-melting awesomeness on the first go-around, Warped is back in SoCal for round two of this year’s run. While the lineup is light on old-schoolers and true arena-level headliners, the fresh blood added this year is without question the best the tour has seen in years. Here’s a refresher course on the best bands to see at the Carson stop of the tour.

10) Go Radio: Fun, catchy rock with big guitars and anthemic vocals … that still feel like they’re being performed by grown-ups, who actually have the life experience to mean what they say lyrically. Exactly what pop-punk should be, effortlessly walking that fine line between catchy and hard-rocking.

9) Every Avenue: Though underrated in the past, the melodic rock act’s newest material is about to change all that. A little less pop-friendly than previous work, the lead single from their forthcoming album looks like the band is exploring the grittier side of the rock spectrum. They just might be doing their best work yet.

8) Grieves: Whether taking the dark and moody path to introspection, being poignantly critical of his surrounding culture, or lightheartedly nostalgic, Grieves’ rhymes are relatable above all else. A master wordsmith and beatsmith, the Seattle native is infectiously catchy while being heartbreakingly real with his emotional honesty. Raw and unfiltered when it comes to saying what he thinks and feels, you’ll swear you just had a one on one bonding session with him by the time his set is done.

7) Lucero: One genre Warped has inexplicably yet to really tap into is the folk and southern rock corners of the scene, so who better for the tour to diversify its lineup with than Lucero? Feel good, classic-sounding rock ’n’ roll perfectly suited to those long road trip drives or … standing in a SoCal parking lot all day. Either way.

6) D.R.U.G.S.: If there’s one thing D.R.U.G.S. frontman Craig Owens knows how to do, it’s sing like he really effin’ means it. Easily the most intense live show Warped has to offer this year, you can bet Owens is going to do some damage when he takes stage now that he’s got a full band that can actually match his level of stage intensity and musicianship.

5) The Dangerous Summer: Straightforward and pretension-free, this guitar-driven melodic rock band doesn’t need to fit into a scene, have a specific wardrobe, or carry any kind of attitude in order to have worthwhile music. Bringing intelligent lyricism and anthemic instrumentation, the Maryland band breaks all the typical Warped clichés when they play.

4) Moving Mountains: Westchester-bred Moving Mountains bring a little artistry and emotionality with their brand of hard-edged rock. Whether delicately crooning out his words or cutting loose with gritty howling, vocalist Gregory Dunn is emotive above all else and is backed by band mates who are similarly pros at setting an emotional atmosphere via instrumentation. From slow and spacey to furiously aggressive, together the foursome can intensify whatever mood they’ve taken on for a song without needing a single lyrical word, a testament to their cohesive musicianship.

3) Against Me! Despite consistently taking a very grown-up, traditionalist approach to their brand of punk, the Florida native elder statesman of the tour are still one of the most infectiously catchy bands on the lineup. Frontman Tom Gabel’s signature whisky-soaked howling never fails to bring out the inner anti-establishment-ist in everyone, and is proof that the concept of punk isn’t just for kids these days.

2) There For Tomorrow: Having graduated from their position as pop-punk pack leaders into full- fledged rock ‘n’ roll heavyweights, this foursome could show even some of their more senior tour mates the right way to do melodic rock. Powerhouse vocalist Maika Maile is one of the best singers to have ever graced a Warped stage, and guitarist Christian Climer could teach the masterclass in emotive shredding, with the entirety of the band possessing a skill level beyond their years. Bringing artistry and intellectualism to a genre largely lacking both, their new album is the epically big-sounding and their live show is likewise the most infectiously in-your-face set Warped has to offer.

1) Gym Class Heroes: Though not a prototypical Warped band, Gym Class has still always embodied the most basic tenants of what it means to be a part of this scene. Masters of seamlessly mixing rock, pop and hip-hop, the foursome’s strength has always lied in their ability to bring the real-talk of the former genre with the fun, feel-good atmosphere if the latter two. Frontman Travis McCoy is a skillful lyricist and performer when it comes to bringing a party atmosphere, making Gym Class one of the most fun sets of Warped while still giving audiences something to think about afterward.

Best of the rest: Just in case you already caught all these bands in Pomona or Ventura, here’s a few more up-and-coming acts who are worth their weight in canned tour water.

The Wonder Years:  A throwback to the classic early days of pop-punk, just replace the lyrical infantilism of the old school bands with, y’know, good songwriting and you’ve got these Philadelphia natives

The Menzingers: Gritty, whiskey-soaked punk from Scranton, the foursome’s Bayside-esque brand of infectious-rock-meets-traditional-punk begs to be sung and drunk along to.

Sharks: With their Gaslight Anthem-y classic rock stylings, the UK-bred band brings some even older influences to this year’s tour with their anthemic rock sound.

Middle Class Rut: Equal parts classic rock and modern indie, with just the slightest hint of ’90s alternative, the Sacramento twosome are pros when it comes to writing massive rock epics, despite their low membership count.