Streak Ends, But Another Begins 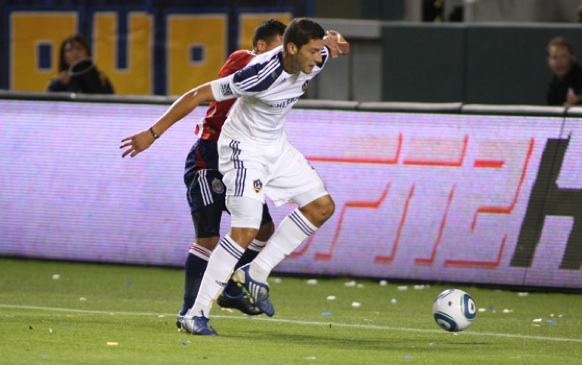 Galaxy defender Omar Gonzalez scored twice against Dallas.
(Credit: lagalaxy.com)
After a very disappointing 3-0 loss in Oregon to the Portland Timbers, the Los Angeles Galaxy bounced back in impressive fashion for a 3-1 victory over visiting FC Dallas at the Home Depot Center in Carson before 21,546 fans.

“We beat a good team tonight. I think both teams were fatigued from not only a long week but a pretty busy schedule to date,” Galaxy head coach Bruce Arena says. “It wasn’t going to be easy, and I thought perhaps the difference in the game is that our team showed a lot of determination.”

The defeat to Portland on Wednesday night ended the Galaxy’s unbeaten streak that reached 14 games, but a new streak began on Saturday night. With the win, Los Angeles improved to 13-3-9 with a total of 48 points for the year. The Galaxy continue to have the best team record in MLS, while remaining atop of the Western Conference. They are six points ahead of FC Dallas and seven ahead of Seattle Sounders FC.

“They fought real hard over 90 minutes, but it was something we had to do to neutralize Dallas,” Arena adds. “I thought Dallas came out and played real well and gave us a lot of trouble in the opening 20 minutes of the game.”

FC Dallas grabbed a 1-0 lead early in the match when Honduran midfielder Marvin Chávez netted a score at the ninth minute mark for his fifth goal of the season. Both Maicon Santos and Zach Lloyd received credit for an assist.

Los Angeles did not remain silent for long, equalizing the score in the 32nd minute when defender Omar Gonzalez sealed a header into the back of the net past FC Dallas goalkeeper Kevin Hartman. Gonzalez, who was wearing a face shield to protect his fractured nose, connected on the ball off a big hop for his second goal.

After halftime, Los Angeles came out striking and ready to capture the win. Brazilian upcoming star Juninho, who is 21 years old, collected his fourth goal this campaign. English midfielder David Beckham sent a pass from the flank, which eventually found a ready and steady Juninho. He then fired a low shot that went in after hitting the side post in the 62nd minute.

Arena acknowledges the strong play of his South American recruit.

“He played well. He’s logged a lot of minutes this year. He’s been a little bit fatigued. I’ve been concerned, but I think tonight he stepped up. And certainly, the goal he scored was a great one,” Arena says of Juninho. “You know, when we get Juninho in or around the box, it’s good for our team because he strikes the ball quite well. I was pleased with him.”

Arena also indicates that Juninho’s wife arrived last week from Brazil. Both had been married for a while, but she did not confirm her stay here until early this month.

Beckham continued with his second assist, and 10th of the season, nine minutes before the affair ended when forward Mike Magee earned his second score. Magee penetrated the net off a Beckham corner kick. On the night, Beckham became involved in all three Galaxy scores.

“That’s him. It wasn’t just today,” Juninho says of Beckham’s set pieces. “That’s the way he has always been. It was good.”

‘“It’s nice to set up goals, but it’s more important that we are six points clear to be honest,” he says. “That’s something we aimed to do, and it was a good performance to night. We started off slow in the first 15 minutes.”

“We have a little bit of time off now before the Champions League game,” Arena states. “We need it. We’re a team that needs a couple of days of, get a little bit of rest, get our legs back, and get ready for what's going to be a real difficult August, September and October for us.”