Dodgers Make Ground: And Other Notes 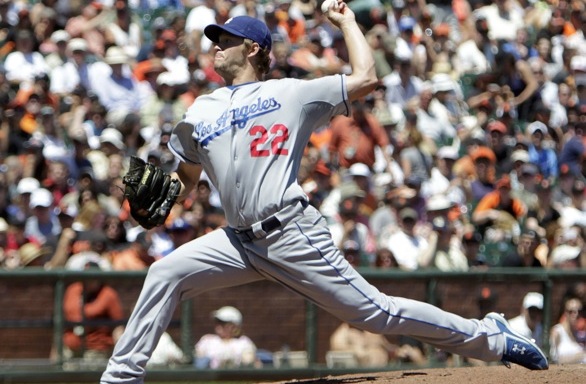 Clayton Kershaw of the Dodgers
(Credit: Josie Lepe/San Jose Mercury News/MCT)
Despite all the woes the Los Angeles Dodgers have experienced throughout this season, they have managed to compete hard while focusing on getting better each game. Of late, the Dodgers have made ground on the Arizona Diamondbacks and San Francisco Giants in the National League West division. However, Los Angeles has gone through other prominent issues and highlights. Let us have a look.

After winning the first two games in Arizona against the Diamondbacks, the Dodgers placed their ace left hander Clayton Kershaw on the mound Sunday in their attempt to capture a sweet three-game sweep. Kershaw pitched well, but a couple of mistakes cost him and the Dodgers their chance in the 4-3 defeat. With the loss, Kershaw’s record moved to 13-5 for the season with a 2.79 ERA. Additionally, Kershaw, who is 23 years of age, sports 184 strikeouts, 1.04 WHIP and four complete games along with two shutouts.

For the game, Kershaw tossed six and one-third innings after allowing four runs on five hits. His five-game winning streak against the Diamondbacks came to an end. Arizona earned its four runs on a pair of two-run homers by Kelly Johnson and Cody Ransom.

“No one to blame but me on this one,” Kershaw says afterward, citing his pitching performance.

Quite deservingly, Kershaw is the NL strikeouts leader. He had a superb first half of the season to get an invite to the All-Star game in Phoenix while proving dominant since the Midsummer Classic, allowing four earned runs in 30 innings en route to winning his four starts from the mound.

The Dodgers scored their runs on a James Loney solo homer in the fifth to cut the hosts’ lead to 2-1, an Andre Ethier double that scored Aaron Miles to tie up the game at two all and a Juan Rivera single to center that gave them a 3-2 lead before the seventh inning. Los Angeles, who has made up ground in the standings with five and a half games in the last few weeks, is now 52-61 and fourth in the NL West. The Dodgers remain 10 games behind San Francisco.

“You have a chance to have a great trip, and you end up having a good trip,” Dodgers manager Don Mattingly remarks. “At this point I don’t think we are at the point where we can look at trips. We are trying to win every day.”

Arguably the best team and organization in all of Major League Baseball, the Philadelphia Phillies pay a visit to Dodger Stadium for a three-affair series starting on Monday, Aug.8. In the first game, the Dodgers send Hiroki Kuroda to the mound against the best pitcher in MLB, Roy Halladay. Known as the Doc, Halladay carries a 14-4 mark with an ERA of 2.55 to go along with six complete games and 159 batters fanned.

After the Tuesday-night contest and the Wednesday-noon meeting, the Dodgers will take Thursday off before engaging against the Houston Astros over the weekend. Los Angeles will then have a pivotal 10-game road trip with stops in Milwaukee against the Brewers, Colorado against the Rockies and St. Louis against the Cardinals.

Multiple reports are indicating that the Dodgers’ problems of too few fans attending games at home this season have been rough on their finances thus far. Los Angeles is averaging nearly 8,000 less fans per game this year.

Consequently, that will cost the Dodgers at least $27 million in reduced ticket sales, concession and parking revenue for the 2011 season. Announced paid attendance has been bad, the biggest per-game drop this season among the 30 Major League teams, after the Opening Day incident involving the beating of a San Francisco Giants fan at the parking lot.

On Friday, both the Dodgers and Major League Baseball agreed to a bankruptcy financing plan for the organization, who has suffered enormously throughout the season because of the ownership legal battle and other mishaps. A court filing in Delaware details a plan for the league to provide unsecured financing of up to $150 million for the Dodgers, who requested protection in June after commissioner Bud Selig did not approve a multibillion-dollar TV deal.