Paul, Your Highness and More 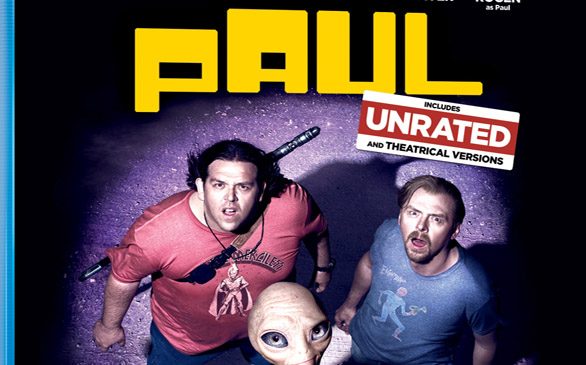 Funny Business: Greg Mottola (Superbad) directs the comedy duo of Simon Pegg and Nick Frost in the close encounter road trip Paul. Pegg and Frost are a pair of comic book nerds on a pilgrimage to Area 51 who get in over their heads when a real life alien (voiced by Seth Rogen) hitches a ride. An all-star cast includes Kristen Wiig and Jason Bateman.

Director David Gordon Green reassembles his Pineapple Express stars James Franco and Danny McBride for the stoner fantasy parody Your Highness. Franco stars as a medieval prince who sets out on a quest with his slacker brother and a warrior (Natalie Portman) to save his kidnapped fiancé. Zooey Deschanel co-stars.

A bride and groom’s marriage gets complicated when their very different backgrounds (Martha’s Vineyard and Brooklyn) collide in Jumping the Broom. Angela Bassett leads a terrific ensemble cast in this romantic comedy.

Rainn Wilson (“The Office”) is an average joe who dons a homemade costume and becomes a superhero in order to rescue his wife (Liv Tyler) from the clutches of a drug dealer (Kevin Bacon) in the action-comedy Super. Ellen Page co-stars as his nutty sidekick. James Gunn (Slither) directs.

The Majors: David Schwimmer proves he has hidden depths in his latest directorial effort, Trust. Clive Owen and Catherine Keener star as two suburban parents whose world comes crashing down around them when their teenage daughter falls prey to an online predator.

Cheech Marin stars in The Perfect Game, an underdog sports story about a ragtag Mexican baseball team who went on to play in the Little League World Series.

The Idiotbox: Joe Flanigan (“Ferocious Planet”) leads a new team of scientists and military through a recently discovered Stargate and into a whole new galaxy in Stargate Atlantis: The Complete Series Gift Set, now available in a 20-disc Blu-Ray set. The team arrives in the legendary sunken city, only to encounter a whole new enemy, the Wraith. A spin-off series that equals the original, it comes loaded with commentaries, set tours, deleted scenes and more.

Gear up for some animated nostalgia with M.A.S.K.: The Complete Series. Part “G.I. Joe,” part “Transformers,” this ’80s classic follows the Mobile Armored Strike Command as they battle the evil forces of V.E.N.O.M. Also included are retrospective interviews.

Stranger than Fiction: Exporting Raymond follows Phil Rosenthal, creator of “Everybody Loves Raymond,” as he attempts to steer a Russian remake of his hit series and is in for a bit of a culture shock. It’s a hilarious fish out of water documentary.

Foreign Fare: Nominated for Oscar’s Best Foreign Film award, Outside the Law is a rip-roaring drama set in post-war France’s Algerian independence movement. The director of Days of Glory continues the story of three brothers whose scattered lives take them in different directions, but who come together in a common cause.

Blu Notes: Yul Brynner and Steve McQueen lead a band of gunfighters in one of the great western adventures, The Magnificent Seven. Based on Akira Kurosawa’s The Seven Samurai, John Sturges’ action-packed film spawned three sequels. All four films and tons of extras are available in The Magnificent Seven Collection.