The Help: Bringing the Best-Selling Novel to the Screen 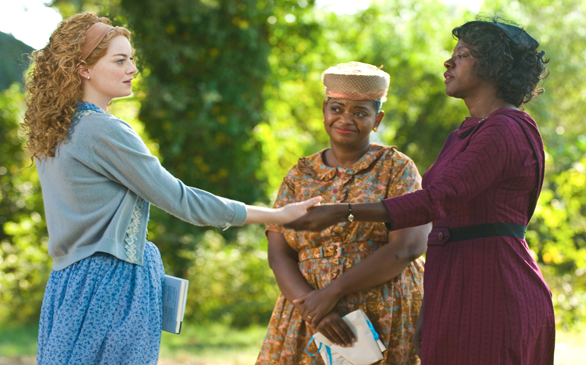 There is hardly a novel that amasses literary success without being taken by the predatory hand of Hollywood and forcedly adapted into a film. It happens every year, whether the novel in question works well on the screen or not. However, such is not the case of the summer’s most highly anticipated film adaption, The Help, which took author Kathryn Stockett over five years to write.

Tate Taylor, who wrote and directed the film adaptation, has been friends with Stockett (whom he lovingly calls “Kitty”) since they were children growing up in Jackson, Miss. As “Kitty” recalls, Taylor convinced her that if she gave the project to anyone but him, the film would go where many good scripts die, in terrible “development hell.” What Taylor creates for his audience is a longer film (It’s nearly two and a half hours.) that does justice to his friend’s original work.

The Help centers around three women whose differences bring them together in an uncommon, but extraordinary way. Aibileen (Viola Davis) and Minnie (Octavia Spencer) are African-American maids in Jackson, in the early 1960s. They raise the children of their white employers, cook the food and clean the house. And yet, they are not allowed to use the inside toilet that the family uses, but are forced to use the separate and wholly unequal one outside.

“It’s the big white elephant in the room in our culture,” says Davis of the lack of education about America’s historically suppressed race relations. “It’s probably a part of our hypocrisy, that we’ve had a brutal history of race, a 346-year history. If anything, I hope the book and the movie will bring that life.”

Skeeter (Emma Stone) is a white woman and recent college grad who returns to Jackson with the new eyes and outlook that she has gained from getting out of her hometown. She is still friendly with childhood chum Hilly (Bryce Dallas Howard) who got married and had babies, but the new ways in which black maids are being oppressed doesn’t sit well with Skeeter. To maintain authenticity, the cast and crew shot on location in Greenwood, Miss.

“Mississippi is another character in the movie, and they love their fried foods,” says Davis about what she says caused her to gain so much weight while filming. “Everything is fried. They fry the butter before they put it on the bread. Then they fry the bread once they’ve put the fried butter on the bread. And it tastes so good.”

Actress Jessica Chastain plays Celia Foote, the new girl on the block who isn’t accepted by the other white housewives because of where and how she was raised. As a vegan, Chastain was expecting all that fried meat to be an issue, particularly in one scene where she is supposed to chow down on a fried chicken leg.

“That’s actually vegan fried chicken!” explains Chastain. “They made like a popsicle stick with a tofu dog and tofu turkey, and then battered it and fried it. It really looks like chicken. It’s amazing what props can do.”

Though the cast and crew giggle and joke as if they’ve been good friends for years, their demeanor turns serious when discussing the grave context in which the film is set. Skeeter, who is a struggling journalist, convinces Aibileen to be interviewed, telling anecdotes and answering questions about what it’s like to be a black maid to white families. Eventually with Aibileen and Minnie on her side, Skeeter interviews enough maids to publish a radical book that reveals things in Jackson aren’t as peachy as they seem.

The Help was loosely based on Stockett’s own experiences growing up in Jackson around this time, though she is hesitant to point fingers at people she used as a basis for the not-so-nice characters. What is so amazing about the book and film is they are based in history; that once upon a time, these things actually happened.

“I don’t know if it’s my generation or if it’s just me, but I didn’t know the levels, the depths, the intricacies,” says Stone about why it is important for younger viewers to see the film as well. “I didn’t know on a day-to-day basis what life was like. I learned a lot about it through this story. I really hope for my generation they will go see this movie.”

The Help releases in theaters Aug. 12.