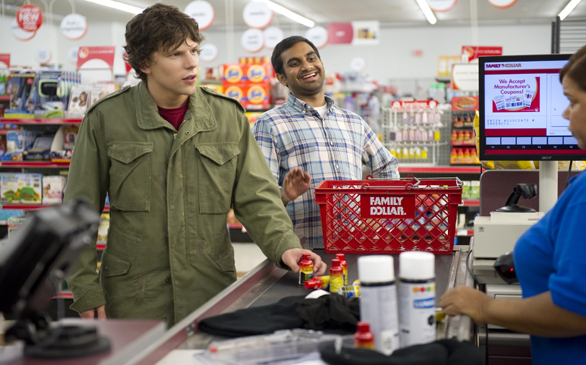 I tend to like my comedies black – like my coffee. With Jesse Eisenberg (recent Oscar nominee for The Social Network) reteaming with Zombieland director Ruben Fleischer for 30 Minutes or Less, I had high hopes. After throwing in producer Ben Stiller, who also tends to veer towards the darker side of funny, I was really hoping for a comedic treat. I was expecting to be let down, and I’m happy to report that I wasn’t.

In the action-comedy, Nick (Eisenberg) is a small-town pizza delivery guy whose mundane life collides with the big plans of two wannabe criminal masterminds (Danny McBride and Nick Swardson). The volatile duo kidnaps Nick, straps a bomb to his chest and forces him to rob a bank.

With mere hours to pull off the impossible task, Nick enlists the help of his ex-best friend, Chet (Aziz Ansari of “Parks and Recreation”). As the clock literally ticks, the two must deal with the police, hired assassins, flamethrowers, and their own tumultuous relationship. At a sleek 83 minutes, the laughs and action come at you fast and furious with nary a dull moment.

Though Eisenberg has the sometimes thankless role as the straight man surrounded by a cast who gets all the good one-liners, it’s because of him that we care what happens to these people.

Ansari is someone who’s on the rise in the industry, and his talents are on full display here. He can make even the most mundane line hilarious – there’s a reason he was asked to host last year’s MTV Movie Awards. In fact, the bank robbing song he sings that’s featured in the trailer was all improvised.

McBride plays one of the most articulate slackers I remember seeing on-screen, while Swardson plays a version of his commonly used comedic alter ego that was used to great effect in a recurring role on “Reno 911!” In another pleasant surprise, Michael Peña plays against type as the hired assassin who is really a big softie inside. Though he’s best known for dramatic roles in films like Battle: Los Angeles, World Trade Center and Crash, he manages to steal scenes in a movie filled with scene-stealers.

I would bet that 2011 will end up being a record-breaking year for R-rated hit comedies (after The Hangover Part II, Bridesmaids, Bad Teacher, Horrible Bosses and Friends with Benefits), and I’m guessing that 30 Minutes or Less will extend the trend. So grab a coffee – sugar, no cream – and prepare to laugh for 83 minutes or more.