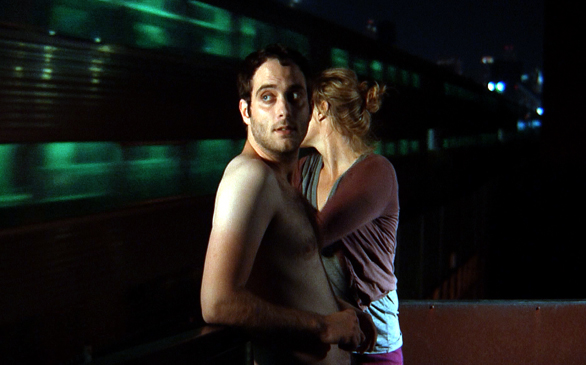 Wingard and Swanberg intend to shed light on the unusual sexual practices and complications of today’s young people, but Autoerotic just seems like a lost film from the very beginning. I could not tell if I was watching a comedy, or just a dark story about the up and downs of sex, and it felt like the latter. I truly don’t think Autoerotic is supposed to be a comedy. I just think the film team lost track of the point of the story.

Autoerotic starts with vignettes about four couples with no religious, cultural or racial differences. They felt too similar from the start, and it became somewhat tiring and boring trying to find the differences or even the conflict in a very dry story.

The overwhelming context of this film seemed to be: Men do not fight back, and girls do what they want. The end. I saw this overwhelmingly in the most entertaining vignette about a pregnant couple.

The couple looks just like the first two, the only difference was that they are expecting a baby. Problems occur when the wife cannot be stimulated sexually, so she has no other option but to seek her best girlfriend to help her reach climax. This comes as no problem for her spineless boyfriend who thinks he is going to be apart of threesome, but much to his dismay can’t even be in the house to watch. He has to sneak in like a burglar watching his prey. His girlfriend gets what she wants, and they both live happily ever after.

The problem with this film was its lack of authenticity in portraying the ethnically diverse society of today with its changing economics and sexual orientations. The couples were all the same, boring and stale.

Autoerotic wasn’t completely bad, it had some highlights, but only a few with too much downtime. It’s a shame because the foundation was there but not enough was built to accomplish the tough task of making a film with such a taboo topic as sex into a classic.