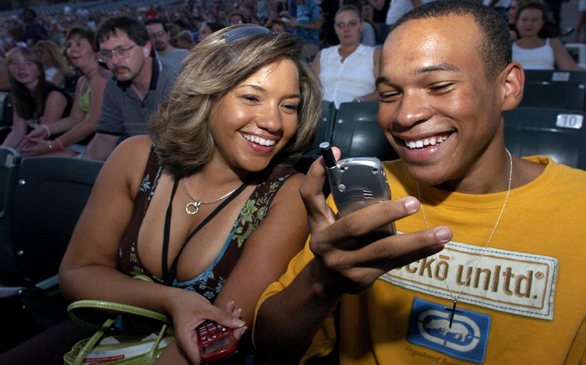 Search for songs from any era and share them with your friends using Spotify.
(Credit: Chris Oberholtz/Kansas City Star/MCT)

On a recent afternoon while driving down Beverly Boulevard, I had 15 million songs sitting in the little tray between the driver and passenger seat. If they were on LP or compact disc, the entire assortment – available via the Spotify application I’d installed on my phone earlier in the day – would fill dozens of tractor trailers and weigh thousands of tons. Sitting next to my morning coffee, the collection jiggled as I hit a bump, but the music coming out of my stereo didn’t skip a beat.

Assuming an average of four minutes per song, I figure that’s roughly 114 years of continuous music at my fingertips. It includes music as diverse as Baroque composer H.I. Biber, pop star Justin Bieber, Emmett Miller, Ma Rainey, Eminem, Sun Ra and Tyler, the Creator. It’s more than anyone could possibly want or need to listen to, but that’s not the point. It’s that it’s all there, a millisecond away.

This year might not be remembered for a revolution in pop music – so far the most sonically surprising thing on the charts has been Chris Brown’s “Look at Me Now.” But we’re currently in the middle of something big, a fundamental shift in the ways in which we experience and interact with recorded music. A notion barely fathomable a decade ago – unlimited access to a huge chunk of the world’s recorded music library – has become reality.

With this innovation, not only is the entire experience of hearing and learning about music changing, but the ways in which we share our passion is, as well. And if history is any indication, the way in which artists make music will evolve along with it.

With the arrival of Swedish-born, London-based cloud service Spotify on American shores July 14, along with the progress of Google Music and the impending launch of Apple’s iCloud music service, this year will be remembered as the year in which keeping our own copies of music, be it physically on CDs and LPs, or digitally as MP3s on our hard drives, became a decision, not a necessity, for both casual fans and music obsessives.

No longer do we need to worry about where to store it, nor try to recover it from a fried hard drive nor even keep it separate from the collections of our friends. We have been nearing this milestone for a while; with a little work, you can listen to virtually any song for free by cobbling together the search results of YouTube, Rhapsody, Mediashare links and Google search results.

But Spotify is on everyone’s lips, and for good reason. What, exactly, is Spotify? It’s an application that offers users access to high-quality streams of music from throughout history, one whose catalog includes the holdings of the world’s four largest record companies and an equally monolithic consortium of independent labels.

It’s currently available by invitation as an application you can download to your computer, smartphone, or Web-connected home audio system. Once installed, any of these 15 million songs are available for free with a double-click. Don’t feel like enduring advertisements? Pay $4.99 a month and they’re gone, or pay $9.99 a month for premium, which also offers better sound quality.

It works and looks like an alterna-world version of iTunes, albeit with different font and color scheme. Launch the app and on the left side of the screen is a list of folders, a combination of libraries and playlists. Click on any of them to access lists of music. For example, a folder called “Local files” contains all of the mp3s on your hard drive – basically, your iTunes music. Another folder is your “inbox,” where any one of your followers can send you songs to hear, and vice versa.

The search engine is where the epiphanies arrive; it’s the portal into the 15 million songs. Search on the song “My Favorite Things” and up pops for your immediate gratification the movie soundtrack recording by Julie Andrews, John Coltrane’s post-bop workout, Barbra Streisand’s 2008 version from Christmas Collection and Brad Mehldau’s pensive solo piano interpretation, among others. Hit shuffle and time vanishes, all these melodic, interpretive and sonic ideas delivered from the past into the present. Like a particular song in the database? Click on a star and it places the song, album or artist into an unlimited storage folder called “Favorites.”

This genre/chronological equanimity changes the way we digest music, opens up the gates on finding music not through radio, MTV, print, blogs or iTunes charts, but through curious wandering and searching through the vast, seemingly endless bounty like spelunkers looking for cave paintings.

Spotify co-founder Daniel Ek says that his plan is to expand the company’s library to contain not just western music, but everything.

He’s certainly not there yet; there are still gaping holes – the Beatles being the most obvious – and some songs in the library don’t always load on the first try, early launch quirks that will no doubt be remedied.

“It certainly has changed things for me,” musician-producer Brian Eno says regarding cloud services, “because one of the things I notice that often happens now in the studio when I’m working with other people, is that we’ll mention something – ‘Do you remember that song by so-and-so? No, you haven’t heard it? Oh, well, listen.’ We suddenly refer to music a lot in a way that never used to happen.”

It used to take work to track down old recordings, he adds.

“But now it’s all there, it’s all equally present, equally current, in a sense, so I think that really changes the way people think about the music that they’re doing. They don’t so much think now of certain styles being unacceptably old-fashioned, and certain other styles being wonderfully, interestingly new. You make your own patchwork quilt.”

Spotify, too, features a glorious sharing tool, in the form of personalized playlists that are as easy to swap with all Facebook friends as double clicking. Within seconds you can be listening to a playlist of 100 songs that your boyfriend just made while stationed in Afghanistan.

You can also subscribe to any public playlist’s feed. I’m on one called “Radiohead Office Charts,” which is just what it says: an ever-evolving selection of songs currently in rotation in Radiohead’s London offices. The list comprises 185 songs and lasts 14 hours. If someone there drops a new track into the folder, I’ll see it and be able to hear it immediately.

But the coolest thing about Spotify and the promise of access and sharing is also the simplest: This morning when I woke up, I had no inkling that I’d be educating myself for the rest of the day on the music of early electronic composer Pierre Schaeffer. I’m in deep, and can’t wait to see what’s around the next corner.