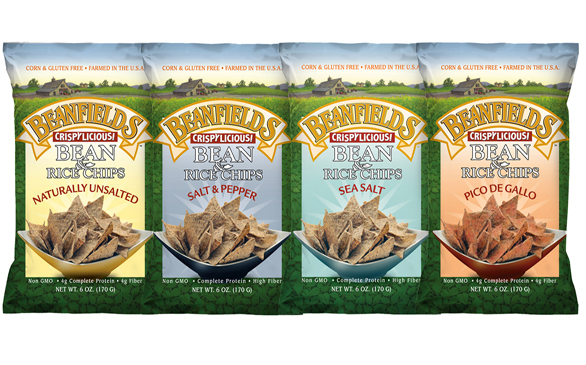 I find that the summer season is usually the time when I stick to healthy eating.  The sun does a number on my appetite, and I’m not really in the mood to eat heavier meals or snacks for that matter. That’s when the time comes for me to eat all the fresh fruits and vegetables that are abundant like squash, tomatoes, mangos and strawberries.

I also find myself trying new organic and vegan snacks. It’s almost like a part of my personality emerges during the summer, sampling things I don’t normally like – vegan chips conjure up the taste of cardboard, and organic means mega bucks. But I need to sustain my energy in the heat and stay fit while doing it. Such a boring cycle I tell you.

While I’ve been shopping in the produce section, I’ve noticed that beans have been abundant and inexpensive lately. Yes, they’re the magical fruit, but they’re also a vegetable! Extremely satisfying, beans are great for the heart and contain antioxidants that protect from cancer, and it goes without saying they help your digestive system. But they can be a bit tedious and boring to incorporate into the diet, but I found a snack that takes all the work away.

In the form of chips, Beanfield’s Corn Free Bean & Rice Tortilla Chips (beanfieldssnacks.com) are pretty tasty. They’re gluten free, high in fiber and have the equivalent of protein found in a four-ounce glass of milk. Besides being healthy, you can’t really tell the difference between potato and these. Although, the smell of the black beans is pretty pungent, it won’t deter you from devouring a bag.

The flavors include Sea Salt and Pepper, Pico de Gallo, plain Sea Salt and Naturally Unsalted. I think the standouts are the Sea Salt varieties as you can dip them in guacamole or salsa and not alter the flavor. The Pico de Gallo is a bit overpowering, but works well with a nice sour cream.

The “Crispylicious” written on the bag holds true to its claim. Beanfield’s is also free from the eight common allergens like peanuts, soy, eggs and wheat. They are just received the non-genetically modified organism award by the Non-GMO Project.

For those of you who practice the raw diet, Brad’s Raw Chips (bradsrawchips.com) produce ‘the healthiest chips in the world’ by dehydrating buckwheat, flax seeds and leafy kale. Brad, a raw food devotee since 2006, longed for the familiar crunchy texture found in his favorite snacks, so he started making his own chips and found that he was onto something and decided to share his gift with others.

Flavors include red pepper, beets, sweet potato and my two favorites: Indian and Cheddar. These being vegan chips, there is no dairy to be found, but the combination of carrots, olive oil and scallion are blended just right to mimic the flavor.

Towards the end of summer, another legume in bloom is the licorice plant. A lot of us associate it with fennel which shares a similar taste but is not in the same family.

I love licorice. You can find it in soft drinks, herbal teas and Chinese food. When I was younger, licorice was the first thing I wanted at the movie theater. I was happy with my box, of the red variety of course. I could eat these all day long and be none the wiser, but I was actually exposing myself to the risk of hypertension with high fructose corn syrup and the sodium content.

So throughout the years, American Licorice (the creator of the original Red Vines) has been continually striving to improve their favorite product, this time in the form of health conscious Natural Vines (naturalvineslicorice.com). Eight ounces of strawberry- or black-flavored twists made with brown rice syrup, wheat flour and licorice extract fill the stay fresh sealable bag. Natural Vines are kosher, vegan and do share a manufacturing facility where nuts are present. I kept a bag of these in my purse for a quick pick me up, and I’m glad I did.