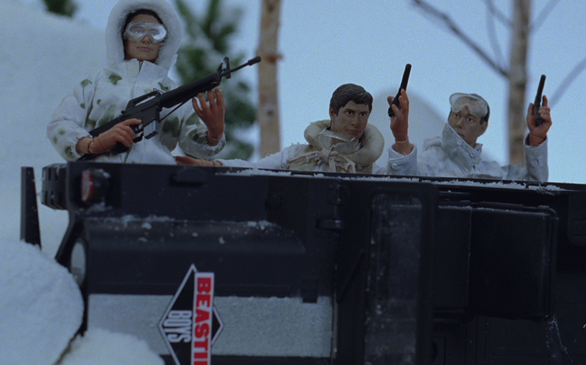 Catch the L.A. debut of the “Don’t Play No Game That I Can’t Win” video at Amoeba Monday Movies.

Do rainy days and Mondays always get you down? While living in Southern California resolves the first one, Amoeba on the other hand will sure cheer you up every Monday this month. The popular record store has curated a line-up of music-related films to be screened for free every Monday in August at Space15Twenty’s courtyard. Browse Amoeba’s vast collection of records and marvel at its music poster covered walls, then head across the street for more visual and aural pleasure.

This week, on Aug. 15, Space15Twenty is holding a Beastie Boys Film Night. They will be screening the Beastie Boys’ long-form video for “Make Some Noise” and the L.A. debut of the music video for “Don’t Play No Game That I Can’t Win,” directed by Spike Jonze (Where the Wild Things Are).

On Aug. 22, you can see Lemmy: 49% Motherf**ker, 51% Son Of A Bitch, a documentary about Motörhead’s Lemmy Kilmister, and on Aug. 29 you can watch Back & Forth, a chronicle of the entire history of the Foo Fighters.

“He’s been documenting me since I was a kid, and it’s one snap, two snaps, or he ignores you, which is death,” says an animated Anna Wintour (or as animated as the Vogue editor-in-chief can get) in the trailer of Bill Cunningham New York, a documentary about the The New York Times fashion street photographer.

With nothing but his bike and his camera, Cunningham has been snapping shots of fashionable New Yorkers since 1978, preceding the Sartorialist and the countless of fashion paparazzi now growing by the minute. Everyone knows how weird and crazy people in fashion can get (and I’m not only talking about Lady Gaga), so even if you’re not into that whole fashion-is-my-life thing, you would be rest assured that the film will nonetheless amuse you to no end.

The New Beverly Cinema will screen the film on Wednesday and Thursday at 7:30 p.m. followed by The Cruise, a 1998 documentary about New York City tour guide Timothy “Speed” Levitch.

Good things come in small packages, or so they say. Although the expression may not always ring true, it is the case for the lineup of short films that will be showcased in the Annual HollyShorts Film Festival. In its seventh year, the festival chose the best of the best from the record 1,000 submissions it received from 36 countries.

There will be an opening night celebration at ArcLight Hollywood on Aug. 11, Thursday where Jamie Linden’s The Envelope in the Glovebox and Jacob Chase’s After-School Special will be screened. Opening night also includes the world premiere of exclusive footage of the political documentary Sweet Micky for President, which explores the Haitian election following the earthquake that devastated the Caribbean nation. The film includes interviews with and appearances by Wyclef Jean, Sean Penn, Ben Stiller, Danny Glover and Nigel Barker.

Director Ben Patterson and Grammy Award winner Pras Michel who produced the film will be in attendance for a Q&A session. The festival will also showcase other genres such as animation, horror, thriller, romance, sci-fi, experimental and comedy among others.

Tragic stories and profound, life-changing movies are nice, but sometimes, you want to walk out of the theater not feeling miserable about the sad realities of the world. In comes the Feel Good Film Festival, a festival which purpose is to show you movies that well, will make you feel good.

The event promises to feature films that “highlight positive themes, happy endings, laughter, and capture the beauty of the world.” Opening night will feature “yellow” carpet entrances as well the premiere of The Italian Key (Rosa Karo), a fairy tale romance about an orphan who receives an antique key that unlocks an old villa in Italy as her only inheritance. Bring Me Sunshine (Rachael Hastings) and The Girl and the Fox (Tyler Kupferer) will also screen on opening night.