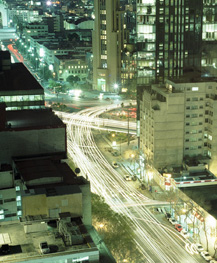 "The Big Apple?" No, let me talk to you about "the Big Taco!" If the energy of New York City can manage to lure you 3,000 miles across the country for a weekend of sightseeing, shopping, excellent food and partying, then Mexico City is a place that needs to be bumped to the top of your travel list. Tickets right at this very moment are selling for a measly $200 round trip from Los Angeles. You can be transported to the center of all the magic in a quick and easy, three-hour flight. One small advisory warning: Be prepared to be amazed.

Known as "el D.F." (el deh-eff-eh) to its natives, it is in fact one of the largest metropolitan cities in the world with a head count of 30 million. Certainly every city has a handful of interesting people to schmooze with and places to admire. Mexico City’s population is a mixture of natives to the city, migrants from other Mexican states, indigenous peoples and quite a few crazy ex-pats that can provide you with more than enough stories to take home. In all, it’s a very warm bunch.

Despite its reputation of being an extremely dangerous city, taxi drivers will often start up a friendly conversation, metro passengers will give a genuine smile and bar-hoppers will definitely be open to purchasing you a shot of tequila. With their laid-back mentalities and neighborly attitudes, the people are sure to leave a lasting impression.

Now that you know there are people to see, which places should you go? Practically every sight has a profound story of art, history and culture.

Mexico City is home to the infamous painter Frida Khalo, who roamed the streets of Coyoacan (ko-yo-ah-khan) with her lover Diego Rivera in the 1940s. Her house and his studio have both been transformed into inspirational museums for the masses to enjoy. Literally, you can see where she ate breakfast every morning, read diary entries about her love for Diego and appreciate immaculate original paintings from both Mexican artists.

Other museums include the Museo Nacional de Antropologia (National Anthropology Museum), the largest museum in Latin America and one of the most impressive collections of ancient artifacts. Equally astonishing is the Palacio de Bellas Artes (Fine Arts Palace) that displays colossal murals from great artists such as Jose Clemente Orozco, David Alfaro Siqueiros and, of course, Diego Rivera.

For a taste of the great outdoors, take a visit to the sacred Aztec pyramids of Teotihuacan. With dimensions much like the Egyptian pyramids (but not as enormous), climbing to the top of the Sun Pyramid or Moon Pyramid will serve for absolutely breathtaking views.

Finally, an afternoon at the park is always a way to seek some peace of mind in such a busy city. Chapultapec Park dates back to the 15th century and to this day remains the biggest park in all of the Americas. It includes: a man-made lake (complete with ducks and swans), statues of prominent Mexican figures, a zoo, an amusement park for children, pretty fountains and more incredible museums. Hanging out in the park as the sun begins to set is truly a majestic experience as the severe air pollution and heavy toxins create a 5:45 p.m. sky with bright pinks, hot oranges, explosive blues and spicy reds like nothing you’ve ever seen before.

No one can resist a good deal. Outdoor markets are practically set up on every other corner in this megapolis. The aforementioned Coyoacan hosts an eclectic market every Friday through Sunday. Much like our Venice Beach hippie-vibe, the Coyoacan market is all the natural jewelry, incense burners and dijeridoos one could want to bargain for.

More treasures can be found in the part of town called Zona Rosa (the Pink Zone) where the Mercado de Artesanias (Handiwork Market) resides. What seems like a tiny dingy door from the outside, actually turns into a gigantic maze of vendors selling handmade maracas, leather-bound shot glasses, traditional Mexican artwork, colorfully woven hammocks and wooden back-scratchers to name a few.

Contrastingly, for name brands such as Louis Vuitton, Chanel and Tiffany’s, the Rodeo Drive of Mexico City is Avenida Presidente Masaryk, in the wealthy part of town called Polanco. But, before wasting your financial aid checks there, head for La Condesa, where original Mexican designers sell pure works of art in trendy jewelry and clothing stores. Genuine shop-til-you-droppers will appreciate Mexico City’s shabby and chic merchandise.

When grabbing a bite to eat, whether it’s fast food or fine dining, watch out for the hot sauce! Remarkable tacos can be purchased on the street for as cheap as five pesos (less than 50 cents). Tacos de Pastor are a definite must, as this combination of pork meat, onions, cilantro and pineapple will change your life forever. The always-fresh seafood from one of Mexico City’s finest restaurants, Contramar, is delightful when followed by a piece of coconut flan. For a heavier meal, the small but succulent Argentinian meat house Che’s is a wonderful dining experience. Tamales, enchiladas and sopes are other traditional Mexican dishes that must not be overlooked. One last thing: Please always asked for b-o-t-t-l-e-d water when the craving for H2O kicks in.

Looking for a good party? The fun generally gets started after a 10 p.m. dinner in Mexico City, so expect to show up to the club no earlier than midnight. Parties, bars and dance clubs generally pick up around 1 a.m. and literally continue until the sun comes up. Salsa, cumbia, rock en espanol, electro, house and ’80s pop are what can be found spinning by DJs from all over the world who make their way to el D.F. Hip-hop and reggae spots are not as common and are typically heard about through the grapevine.

Magazines such as Tiempo Libre are a wonderful resource to learn more about what’s happening each night. Lounges and bars filled with the emerging posh, young and artsy crowd congregate nightly in La Roma and La Condesa, the sections of the city where nightlife is taken to a whole other level. Prima and the T Gallery bars mix tropical drinks and pour Mexican beers till your heart’s content.

One complete culture-shock experience would be a visit to the Zocalo (center of the city). The infinite amounts of people walking down the streets, music blasting from shops, smell of warm handmade corn tortillas being sold and colonial architecture of apartment buildings standing tall are all Mexico City in a nutshell. An easy way to get a taste of it all is by catching a ride on the double-decker tour bus that tours around the city’s finest attractions. Follow the red flags marked "Turibus" in the Zocalo to board or plan ahead by checking out www.turibus.com.mx.

Mexico City is a crazy place where a lovely chaos begins to form as one standing on a street corner takes a moment to admire and say, "Viva Mexico!"
Article posted on 8/31/2005
This article has been viewed 3210 times.