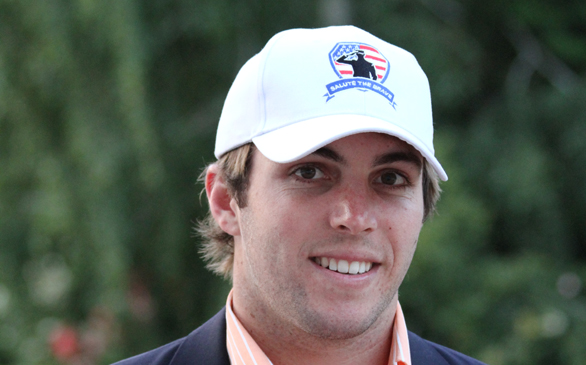 USC has the slogan of “fighting on,” and one USC Trojan is the prime example of just that. Ryan Morris, 21, is a senior at USC majoring in business with a concentration on entrepreneurship. Morris had his time at USC planned out being a walk-on recruit on the USC baseball team. He wanted to see where it would take him, and hopefully enter the draft.

But things do not always go as planned; after two years Morris was let go by the team and was left wondering what’s next?

“Everyone stops playing at some time, and mine was just earlier than I intended it to be,” says Morris.

After being cut, it led him to want to try new things and develop a clothing line. “I grew up in a retail family … my grandfather founded the Mervyns Co.”

Morris realized he wanted to give back to his community and figured that he would begin his own company, Salute the Brave. The original name was “Here’s to You,” but it was copyrighted.

So while hanging out with his fellow Lambda Chi fraternity brothers one threw out salute the brave, and “everyone said, ‘Yes, that’s it.’” Not far after establishing a name, the slogan came soon after: Be a hero for a hero.

Morris launched the company on May 6 as well as his website salutethebrave.com. He’s sold hundreds of hats and shirts that portray America’s red, white and blue stripes with a saluting soldier.

“Realize what these soldiers are sacrificing,” Morris says. “[People] can support by purchasing a hat or shirt … [With each purchase] you can send a care package overseas.”

The care package contains a gift containing a hat and shirt as well.

“I have people who find me on Facebook, and I get thank you notes. [The care package] is kind of a pick me up for the troops, thanking them for their service,” Morris says. “It [covers] all areas of the armed forces.”

The company sells shirts, hats and bracelets, and has a lot of ideas for winter products such as sweaters, visors and sunglass holders. People should take a moment and see what this company is all about.

“A lot of companies will do their sales, and some percent goes to soldiers who have been wounded … but with this company, you know that with your purchase you’re saying thank you to the troops,” Morris says. “All Americans are so thankful for them fighting overseas, [they’re fighting so we can] have the freedom that we have here. When you wear one [of our products] people will know you have helped out the troops.”

This company has not only opened doors for Morris, but has brought him closer to his grandfather. Morris says he has been almost like a silent partner guiding him through this process in order to become a successful businessman.

“Our conversations are based around the clothing industry, and he has been my mentor,” says Morris. “He wasn’t able to go to college, he worked in his father’s store, and so he built Mervin’s Co. from the ground up. I’ve been learning from his past experiences, so I can build up my own brand.”

After graduation, Morris hopes to continue to take Salute the Brave as far as it can go, and make it a big brand.

“I honestly want to keep building this brand and get some employees working for me to get it even bigger … I want to see people wear it; I want it to be a brand that self-explains its support for the troops. I want Salute the Brave Co. to be my career.”

This is a company based on helping others, thanking the troops overseas who have put their lives on the line for the good of their country. Although Morris doesn’t have any family in the armed forces, he says this company is his way of giving back to the war efforts.

Being the sole creator of the company it’s been hard to make decisions, but he knows he has the support from his family and friends. One thing is clear: This is his passion.

“I’m going to dedicate 100 percent of my time to this and see where it can take me.”