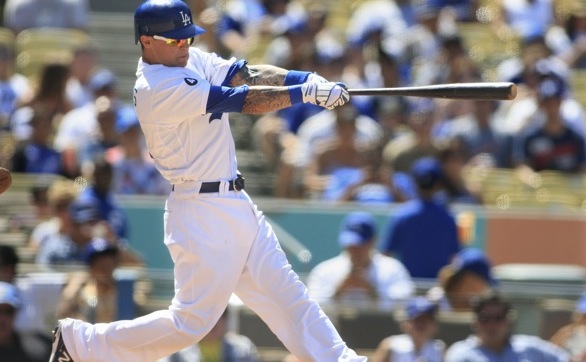 After suffering a three-game sweep against perhaps the best team in Major League Baseball in the Philadelphia Phillies, the L.A. Dodgers connected on a three-contest sweep of their own against the visiting Houston Astros at Dodger Stadium over the weekend.

Friday night’s affair proved to be a nail biter, but the Dodgers eventually claimed victory in the 10th inning with a Matt Kemp RBI single to shallow right field. It was Kemp’s fifth career walk-off hit in the team’s 1-0 victory that plated third baseman Casey Blake.

“It always feels good to get the game-winning hit,” Kemp says after Friday’s win. “That’s one of the most exciting parts of baseball, being responsible for helping the team win in that moment. I hit two balls hard today, and the one I hit soft becomes a hit. I guess that’s how baseball works sometimes.”

Although the record does not show it, newcomer right-handed starting pitcher Nathan Eovaldi tossed a solid six innings. Eovaldi allowed two hits, no runs, four walks and fanned three batters. A Houston native, the 21-year-old was a 2008 11th-round selection for the Dodgers; thus far in two starts this year, he has displayed many signs of great potential.

“It was cool, going against the hometown team I grew up watching, but I just tried to stay focused on the game and give my team a chance to win,” Eovaldi confesses. “I felt good.” After Eovaldi, four relief pitchers combined for a two-hit shutout four-inning performance. For the Astros, Bud Norris pitched seven innings, striking out eight Dodger hitters and allowing no runs. Kemp knew that pitching would be critical in the ballgame. “It was a pitcher’s duel today, just one of those days where there wasn’t a lot of hitting going on,” he says. “Norris was throwing strikes and getting hitters out, but our young buck did a great job of getting people out.”

Left hander Clayton Kershaw, the National League strike outs leader at just 23 years of age, took the mound for the boys in blue in Saturday’s 6-1 win. Kershaw was consistently above par, as he has been all season long. In eight innings of work, Kershaw allowed six hits, one walk and struck out nine Astros.

Kershaw’s record improved to 14-5, which gives him a career-high in wins. His ERA is now 2.72 and his strike out total increased 193. Can someone smell a Cy Young winner?

“There’s something comforting about pitching at home because you do it the most, obviously, so you’re used to it,” Kershaw remarks of his superb home pitching. “Not to mention, this ballpark is a pretty good place to pitch. Wins are the most important thing, not necessarily my individual record, but just team wins when I’m pitching. As long as we’re winning, it doesn’t matter what my record is.”

“Matty’s our guy, and it’s always nice to get two runs like that with him going deep,” Kershaw tells the media of Kemp’s performance. “Anytime he hits homers, we feel pretty confident in ourselves. It’s almost unfair, because we almost expect it out of him. His talent’s really taken over for us. It’s awesome.”

For the game, Los Angeles amassed nine hits in an effort that highlighted teamwork. Kemp, however, highlights Kershaw’s pitching strengths.

“We’re pretty confident that if we get Kershaw a couple of runs, he’s not going to give that lead up,” Kemp says. “He’s definitely one of the best pitchers in Major League Baseball. He’s dominating, he’s doing his thing, and I’m glad I don’t have to face him. He’s making some hitters look like they don’t have a clue of what they’re doing up there. He’s got some nasty stuff.”

“It was awesome to have my family here and get it,” Sellers says of his professional debut. “When I got to the dugout, I got a lot of high-fives and hugs and stuff.”

Los Angeles begins a 10-game road trip today, which features stops in Milwaukee against the Brewers, Colorado versus the Rockies and St. Louis against the Cardinals.