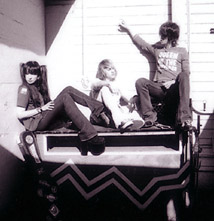 Untitled Document "We love old people and babies," says Gazz bassist and vocalist Angie. "Old people and babies tell it like it is." As seemingly random as this may sound, the statement could arguably serve as a metaphor for her band’s spectrum-covering stylistic appeal and range of influences as well.

Gazz, rounded out by singer and guitarist Jimmy and drummer Justin, takes the indie, do-it-yourself, bare minimum approach that only a three-member band can effectively convey, and mixes it with everything from pop to electro to even a little goth. Even for all its genre-bending though, Gazz is a band that comes from humble beginnings and is very much still in its formative process.

Recalling the band’s early days, Angie tells of much simpler times, "I had literally just learned to play bass." Though she speaks fondly of those days, she does admit, "I listen to the old tracks and it’s just like, what was I thinking?" Answering herself, she jokes, "Well, I know what I was thinking. I was thinking one finger, one string … but what were they thinking? Like, don’t you guys want a real bass player?"

As it happened, however, this approach combined with Jimmy’s polar opposite approach to musicianship seems ultimately to have worked out for the better for Gazz. Says Angie: "Jimmy has been playing instruments of all kinds, forever. He’s been playing in bands since he was 11."

She says of herself, on the other hand, "I didn’t know jack about music except for what I liked. I’ve always lived for music in terms of being a huge fan, but because I didn’t know anything about music I’d always come from left field with my writing."

Somehow, the two make it work, though. "It’s really kind of cool because I come from a totally different place and save him from being predictable," says Angie. "He just writes really catchy stuff, he can’t help it, and I don’t. I kind of darken it up. We call me the ‘de-Korn-ifier,’" she jokes about her aptly chosen nickname.

Citing influences from Interpol to early Elton John to Bauhaus to Duran Duran, Angie’s eclectic musical taste is undoubtedly showcased for all to hear in the collective Gazz sound. "It’s a combination of uber-pop and way dark," she says. On first listen, you might not know Gazz had such a heavy side underneath all the infectious, hook-driven melodies and harmonies, but according to Angie, "We actually have some really haunting, melodic, somber stuff and, lyrically, I think we’re pretty dark too."

The inspiration behind the darker themes comes from "the things that you think and feel when you’re alone. The stuff that usually remains unspoken, the really self-conscious stuff," says Angie.

"Jimmy and I have always felt like outcasts. We were always on the fringe and we were never the popular kids. We sat alone a lot and contemplated dark things," says Angie of her time growing up. While their "uncool" kid history has done a lot to shape both Angie and Jimmy’s musical tastes, one thing for certain is that the band never has – and assuredly never will – use it as a means of fitting into a specific genre, even a popular one it might so easily lend itself to.

Says Angie, "We never really think about what’s in style or what’s out of style, we just are."

And if there is one thing Gazz would like to impart to listeners, it is the idea that it’s OK for them to do the same, to just be.

Gazz will play Aug. 31 at the Knitting Factory in Hollywood and Sept. 24 at the Block in Orange. For more information, visit www.gazzoline.com.