Back to School: Living the USC Campus Life 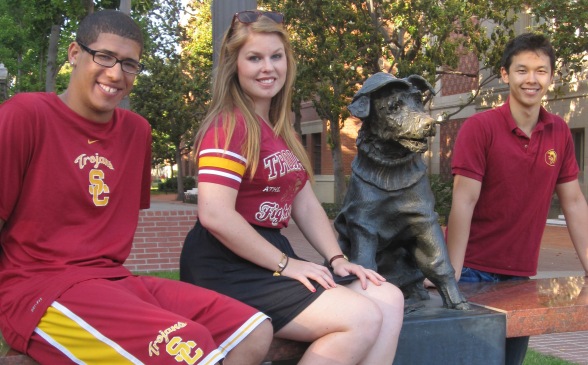 George Tirebiter was the unofficial mascot in the 40s. A statue was erected on campus in his honor.
(Credit: Elisa Hernandez)
With classes just around the corner and summer being a thing of the past, for some students it’s a fresh start, for others a steppingstone on their path to success. One thing is clear, high school is officially over, and for the next four years some students will call USC home.

But as seniors get ready for graduation, juniors make their last minute adjustments and sophomores try to figure out their majors, it seems freshmen are left fending off for themselves. USC is a pretty big place, but would you rather be anywhere else?

“USC is the best place to go to school because it has everything a college student could want in their own college experience: great athletics, school spirit, amazing professors, academics and a Trojan family that is with you for life,” says Ann Austria, a recent USC graduate. “At USC you can make your own experience, whether it’s joining a sorority/fraternity, joining academic clubs or really pursuing your own academic interests.”

One of the best tips I received before I attended any school from elementary to high school, was to visit the campus itself. Getting a good idea of where you’re going makes it easier to get where you want to be. USC is a big campus, and it’s always good to know where at least your first class is.

College can be a scary transition and not only for freshmen, but for transfer students as well. I myself transferred to USC in spring 2010. One important thing I have learned at USC is to pace myself and not to bite off more than I can chew. Getting into small habits like studying, maintaining a somewhat appropriate sleeping cycle and organizing one’s week are good steps to keeping sane during stressful situations.

“Being organized is the key to getting your work done, but still having fun,” says Anthony Harris, a junior at USC. “I struggled with time management, but it’s all about prioritizing. Fun doesn’t have a deadline, homework does.”

Another important tip is to be social, and I don’t mean socially awkward, but really network with the people around. You may be nervous on the first day, but chances are your fellow classmates feel the same way you do even though they try to hide it.

“Come class time it’s down to business, but you can always make friends,” Harris says. “It’s always good to be yourself and be relaxed, that way you will have a clear mind and be ready for any setting, whether it is a social or educational one.”

As I enter my senior year I realize that this is my year to truly indulge myself in Trojan culture and participate in all I can on campus, taking advantage of any and every opportunity. But don’t wait till the last minute to do so, start as soon as you can. Once you meet a few people you wouldn’t mind splitting a meal with, USC students have a wide selection of on- and off-campus food to choose from.

One of the many perks of being a USC student is getting discounts at certain food places, such as Subway [University Village - 975 W. Jefferson, 2805 S. Figueroa St., 335 S. Figueroa St.; subwayla.com]. Students also have a newer restaurant to try; Freebirds opened this past year across the street from USC [3335 S. Figueroa St; freebirds.com]. Students have commented it’s like “a Subway for burritos,” so make sure you stop on by.

If you’re studying late and a burrito isn’t on your mind, there’s always Seattle’s Coffee [3335 S. Figueroa St], which has not only good coffee, but delicious ice cream shakes too.

If you don’t feel like walking, the Ronald Tutor Campus Center is the place to be. It has everything from fast-food restaurants (Carl’s Jr., Panda Express) to places where you can sit and eat (Moreton Fig, Traditions). It provides a good environment where students can socialize with their friends, eat and even study.

Fall semester is always full of excitement as we welcome new students and prepare for the football season. Welcome Week (Aug. 17-24) is one of the main events on campus where students feel the love and become a part of the Trojan Family.

As part of Welcome Week, the Student Involvement Fair (Aug. 24, 11 a.m.-2 p.m.) is a major event that takes place across Trousdale Parkway. Here, all the clubs on campus set up shop and allow students to sign up for more information and hopefully join. Clubs, fraternities, sororities and associations all have different stations for you to pick from. It ranges from multi-cultural Greek organizations to being a part of Annenberg Television News (ATVN - Schools station). Some of these clubs can provide you access to many things. For example, by volunteering in the sports department at ATVN, you may be asked to cover a USC football game and have a chance to be on the field in front of thousands of fans and attend the post-game press conference.

There are also many hands-on activities as well as sports clubs that students can join such as rowing or soccer. If that doesn’t grab your attention there are also other associations such as the Trojan Knights, Helene’s and Trojan Pride; these are groups that promote school pride and preserve USC tradition.

“[Becoming a knight] it’s terribly difficult, but it’s the most rewarding experience that you will have,” says Justin Zhang, a current Trojan Knight. “[We get] front-row football seats and know the history of the school.”

Speaking of football, as you continue to get settled in buying a season football pass is a must. The season is just around the corner with the Trojans having their first game on Sept. 3 versus the Minnesota Golden Gophers. Game days are probably the best days of the year; before every home game the football team hosts a pep rally in Heritage Hall where the players speak and pump up the crowd, being joined by the USC Trojan Marching Band and Song Girls.

One crucial thing all students have to know is the school’s alma mater as well as its infamous Trojan Marching Band songs “Conquest,” “Tribute to Troy” and “Tusk.” Facebook them, YouTube them, do what you have to in order to know them. These three songs are crucial to supporting the Trojans on the football field.

Regardless of sanctions placed against us, come game day a sea of cardinal red and gold surrounds the campus and the L.A. Coliseum. Students, alumni and their families all come out to support the mighty Trojans.

“Before any game, you have to tailgate or you can listen to the band. The band usually plays a concert before going to the stadium,” says Joel Garrison, a former Trojan Marching Band Member. “The atmosphere around school is insane, especially during Rivalry Week.”

The school truly comes alive on game days, but nothing beats Rivalry Week. Rivalry week is about students showing their support for their school as they get ready for USC to battle UCLA in football. We have events such as “Save Tommy Night,” where the Trojan Knights stay with our beloved Tommy Trojan statue in order to protect it from being vandalized by UCLA students.

During fall semester there is always something to do on campus, whether it’s hanging out with your friends on Trousdale or McCarthy Quad – there’s never a dull moment. Being at USC is like no other experience you will ever encounter.

“Create your own experiences,” says Austria, “at USC there’s no mold in terms of who you have to be. Take advantages of all the opportunities the university has to offer.”

With school beginning Aug. 22, booklists are being published and back-to-school supplies are being bought. One important thing to do at USC is explore. Go visit different buildings and libraries. You will be surprised at what mysteries you can uncover on campus.

Recently, we have added a statue of our beloved mascot “Traveler” placed directly across from the infamous Tommy Trojan. But not many people know if you continue down Trousdale toward the coliseum you will meet another mascot.

George Tirebiter was the unofficial mascot of USC in the 1940s. There are many different versions on how Tirebiter came to be such a USC legend, but he is a legend nonetheless, and a statue was made in his honor.

One fun fact that most USC students don’t know is that as much as we dislike our cross-town rivals, there is a Bruin statue hidden somewhere on campus, and hopefully by the end of your journey you will know where … all you have to do is look up!
Article posted on 8/17/2011
This article has been viewed 3808 times.