Who Says Downturn is No Laughing Matter? 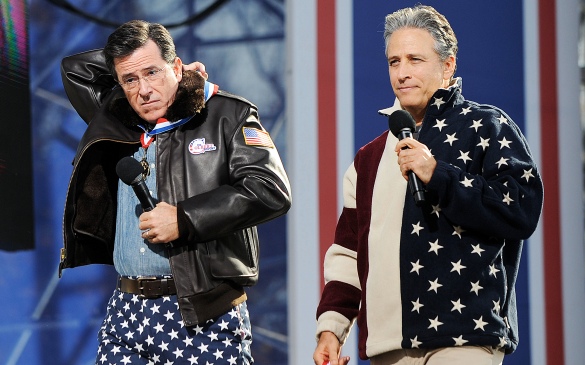 The markets are wacky, and it’s a laughing matter. Throughout the media, from cable TV to Twitter, professional laugh-mongers – the comedians whose job it is to get laughs out of almost anything – are at it big time. Comics feel the pulse of the moment, what large numbers of people are thinking or wondering – or thinking other people think or wonder.

Aug. 8, when the U.S. markets had their first chance to react to Standard & Poor’s downgrade of the U.S. debt, is now known as “Trillion Dollar Monday,” because that’s how much personal wealth went up in smoke in one day. Then on Aug. 9, the Dow went stratospheric, recovering much of Monday’s losses. So heck, let’s laugh.

“We are living in a target-rich environment,” says comic Andy Borowitz via e-mail. “The one quote I’d share with you is actually one from Will Rogers, who said it best: ‘There’s no trick to being a humorist when you have the whole government working for you.’”

What are folks laughing at? Adultly enough, it’s the name Standard & Poor’s.

Steve Martin tweets: “If you’re looking for a debt rating service, would you go with one named Standard and Poor’s?” A question to be asked.

On Aug. 8’s post-slump show, Comedy Central’s Jon Stewart, in a segment drolly labeled “Rise of the Planet of the AAs,” led off with: “Who’s going to listen to a company whose name translates to Average & Below Average?”

“Correct me if I’m wrong,” tweets comedian Colin Quinn, “wasn’t it fake standard and poor ratings that started this collapse? So why are they legit now?” And his follow-up: “We’ll teach the whole world a lesson. We kill everybody who works at standard and poor and then we ask Moody’s ‘you got something to say?’”

Even European comics (who have even less to laugh about) are in on the act. German stand-up guy and TV host Christian Ehring tweets: “Now it’s happened: Standard and Poor has downgraded summer to autumn.”

In his column, the Borowitz Report, Borowitz leads with the headline “Predator Drone Seen Hovering Over Standard & Poor’s Headquarters.” An excerpt: “The Predator appeared in the skies above the company’s headquarters minutes after it was rumored that S&P was about to downgrade the United States to the same status as Pluto. As a so-called ‘dwarf nation,’ the U.S. would no longer be accorded the same respect as a recognized country like France or Brazil, one S&P source said: ‘Basically, the United States would be considered a social network with parking.’”

Back at Comedy Central, Stephen Colbert notes that AAA ratings “are reserved for economic powerhouses like the Isle of Man” – the lowly Celtic island in the Irish Sea.

For his part, Stewart suggests maybe the United States could ask for a loan of “Man-bucks.”

It’s just a rich, bottomless moment for humor. So many absurd people, institutions (Congress, Wall Street, the White House) and events to laugh at – ratings (are they like your grades at school?), Treasury Bonds (what thousands bought on Monday, after U.S. debt had been downgraded – go figure), all the hieratic prestidigitation and froufrou of the mysterious world of high finance.

Seth Reiss, head writer for faux-newspaper The Onion, is grateful for all the silly stuff but says there’s almost too much: “It’s all definitely ripe for comedy, but the fodder is so rich, the challenge is to make the best joke possible, not the easiest joke.”

What makes it so good? “It’s a story nobody understands,” Reiss says. “Especially those in charge. You have fear, intangibles. You can even make jokes about that - that it’s such a huge part of our lives and no one gets it.”

At a fast-breaking time like this, even The Onion rushes to press. Some material has been “fast-tracked,” as Reiss puts it, so the laughs are fresh. Headlines have included “Obama: Debt Ceiling Deal Required Tough Concessions By Both Democrats and Democrats Alike” and “Drunken Ben Bernanke Tells Everyone At Neighborhood Bar How Screwed U.S. Economy Really Is.”

And this story is only beginning! This could be a very long-running laugh fest.