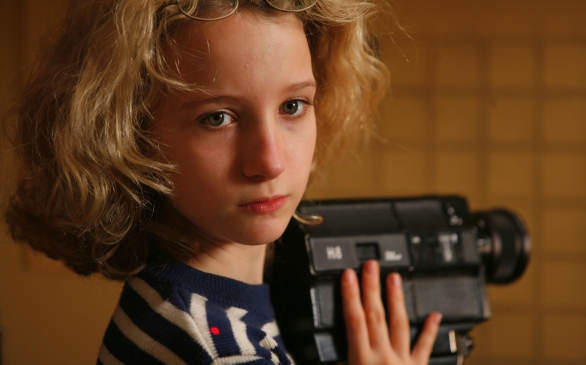 Seen through the eyes of an 11-year-old girl, The Hedgehog tells the story of the quite brilliant, introverted and unusual Paloma (Garance Le Guillermic). A young girl of French privilege, she resents her upper-class upbringing and has come to a difficult decision: On her 12th birthday she will kill herself, escaping her destined bourgeoisie life. This story has a unique plotline that rivals utter controversial brilliance that pulls you in from the first time Paloma’s on screen.

Paloma will take her life but not without finishing a film about her life and her family, to show people why she decided to make this mature and extremely serious decision. She manages to show the conflicting and depressive relationship of her mother and father that has been a catalyst in making her decision.

Paloma feels like a kid that no one cares about. Her father is a successful businessman who would rather play host for guests. Her mother is a reeling alcoholic and an emotional wreck who spends more time talking to plants than caring for her daughter. Couple this with the typical evil, self-flattering big sister, and Paloma still appears to be a typical 11-year-old asking the question “why am I in this family?”

Paloma learns the value of life from her strict building concierge Renée (Josiane Balasko, French Twist). When Kakuro Ozu (Toga Igawa, The Last Samurai, Memoirs of a Geisha) moves into the building, he transforms Paloma and Renée’s world. Renée especially; the two create an odd friendship/relationship that makes Paloma start to see that life is about finding beauty in the strangest and unforeseen places.

The Hedgehog is a well-done film with in-and-out cuts between the filmmaker’s view and Paloma’s Hi-8 handycam view. This gives The Hedgehog a soulful taste of reality, making the film feel extremely realistic, and the viewer starts to further adore the pintsize Le Guillermic who steals the show.

The Hedgehog is a good film with an extremely controversial plot of adolescent angst, but has a realistic spin that is pretty refreshing in today’s film market. It’s French, so it has the ego artistic feel. Although it’s not as strong as other adolescent films, it’s a good film to just sit back, laugh and be entertained.