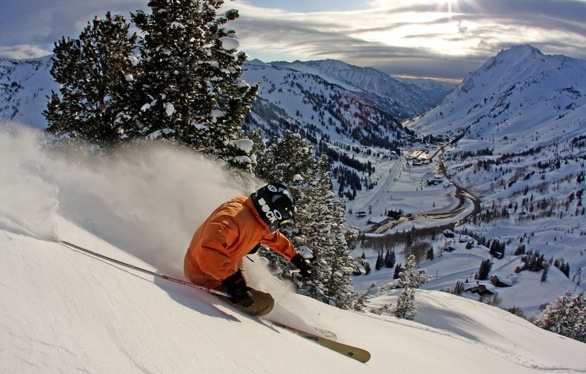 If it seems like the ski season at the Salt Lake City-area ski resorts just ended, it’s because it just did. Mother Nature brought so much snowfall to the area that Snowbird was still open for skiers and snowboarders on the Fourth of July!

You can bet that there will be plenty of powder back on the slopes in the not-so-distant future, and there are some upgrades at the resorts to look forward to also. At Snowbird you can now utilize the Flaik System, a GPS device that allows you to track exactly where you went on the mountain and how many vertical feet you mastered. Solitude is now offering free WiFi throughout all of Solitude Village, while at Brighton they’ve added higher quality rental gear and new snowmaking equipment, just in case. Alta has improved their RFID ticketing system so that you will now be able to use a smart phone app to reload your Alta card for skiing instead of having to go to the ticket office. visitsaltlake.com.

Europe has long been a top destination both for travelers interested in wine and those who wish to explore countries at a leisurely pace by bicycle. Now there are tours for those with both interests and BikeToursDirect offers trips through scenic places like France’s Loire Valley, the Balaton Uplands of Hungary and along the Rhine River in Germany.

Two of the most popular tours are in Italy where riders cycle through Tuscany sampling wine and food along the way. And in case you’re wondering, you can’t be fined in Italy for bicycling after you’ve had a few glasses of wine. Visit biketoursdirect.com and play with the “tour finder” function and you can map out a bike tour to suit your ability and interests.

Guide Gecko, one of the world’s top publishers of travel guides, has developed an iPhone app featuring hand-picked accommodation suggestions and reviews for the entire route of the Pacific Coast Highway from San Diego to Seattle. The app is available from the iTunes store for the introductory price of $0.99.

To celebrate the launch, Guide Gecko is having a contest where they’re giving away a free night’s stay at the Vagabond’s House Inn in Carmel; all you have to do to enter is answer three questions and those answers can all be found by utilizing the app. Enter by Aug. 31 via the contest page at guidegecko.com.

Not all of the fun in Pensacola, Fla. happens during spring break. Pensacola is the place to be on the Gulf Coast in mid-October as 50,000 music lovers and 80 bands converge for the DeLuna Fest. Some of the confirmed acts for this year’s blowout are Airborne Toxic Event, Big Boi, Weezer, Jane’s Addiction, Cut Copy, the Shins, Cake, Ladytron, Bettye Lavette, Stone Foxes, Toubab Krewe, Robbers on High Street, Asobi Seksu and Griffin House. Find the complete lineup and ticket and hotel info at delunafest.com.

If you’re thinking about a trip to Europe and you need to be budget-minded you should consider traveling to Portugal. Lisbon is consistently voted one of the Top 10 most beautiful cities in Europe, but it is also one of the most economical; you’ll pay about 65-percent less to eat out in Portugal than you would in Italy. The country is also rated the second best in Europe for low-priced accommodations. Find information on packages and deals at insideportugaltravel.com.

International volunteer placement organization Projects Abroad has three new projects in the works. Projects Abroad volunteers can now work with the first and only primate rehabilitation center in Argentina where the focus is on the rescue of the Black Howler monkey, now considered vulnerable because locals hunt it for meat. Volunteers are also working to conserve animal and wildlife populations on the island of San Cristobal in the Galapagos Islands and working on HIV and AIDS education with the Tanzania Human Rights organization in Arusha. To find out more about volunteer placement visit projects-abroad.org.