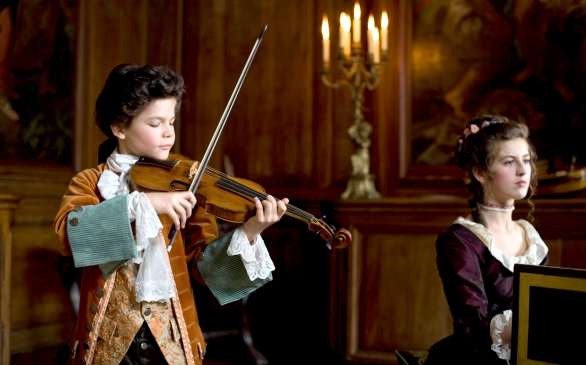 A truly enjoyable period piece, Mozart’s Sister is a film that feels authentic and pulls you in from the very first scene. Mozart’s Sister is a historic film that entertains as well as educates. It takes place in the young lives of monumental classical musician and composer Wolfgang Amadeus Mozart (David Moreau) and his brilliant composer/musician sister, Nannerl Mozart (the amazing Marie Féret).

Elder sibling Nannerl was forced to take a back seat to her prodigy kid brother by their father, Leopold (Marc Barbé). Leopold has instilled in his daughter that her talents and services are not needed for the male-driven culture of 18th century Europe. The equally talented Nannerl must sit idly by as Wolfgang astounds most of the western world, but she has a very difficult time understanding that she is in the family to just be Wolfgang’s sister. Nannerl calmly just wants to be appreciated for her musical talents, the same as her brother, but starts to see that she will never find her place in the male-dominated time.

Adding to Nannerl’s pain is that, thanks to her and musical brother talents, the two never have spent time just being kids as they are continuously traveling with their father, touring Europe and performing in front of the royal courts of pre-French Revolution Europe.

Nannerl’s problems persist as she approaches marriageable age, as she is now forbidden to play the violin or compose as much as her brother. When the Mozarts perform for the son and daughter of Louis XV, it provides much needed fun for the anxiety-filled Nannerl but she is not given much of the spotlight She soon starts to try and find herself in a world where she’s just viewed by everyone as Wolfgang’s sister.

Mozart’s Sister did a great job satisfying the three Es: It was entertaining, enjoyable, as well as educating for the viewer. Mozart’s Sister simply grows and gets betters as the film progresses, and you can’t wait to see more as the film develops. Historians should enjoy the French-subtitled film because of its authenticity. I truly felt I was looking through a special screen into the past, which in many period pieces you do not feel. The characters were well portrayed and made it fun. If you would like to learn the detailed story about the prodigal Mozart family, this is a definite must-see.