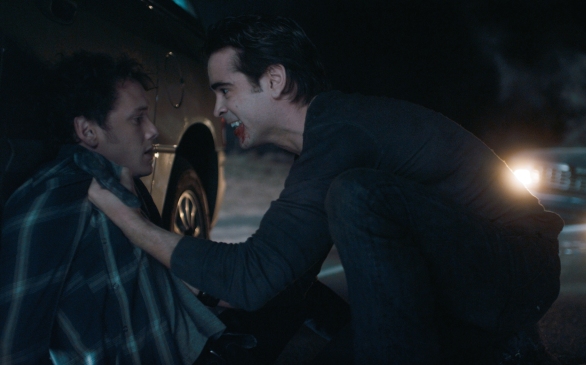 Horror-fest goers and fanatical fans of horrifically cheesy B-movies from the ’80s, rejoice! Fright Night is coming back to the big screen, except it has been reinvented for us, the glorified target audience who has seen every archetype of vampire via Netflix. We may have been aghast to learn that we slightly crushed on Robert Pattinson while watching his take of the blood-sucking fiend, but here comes the remedy to what years of being inundated with lovesick, friendly vampires has done to us.

“It’s gory and self-conscious and campy,” says actor Anton Yelchin who is protagonist Charley Brewster in the upcoming Fright Night remake. “This one takes a look at teenagers in a world where we are so oversaturated with the icons of vampire mythology. What happens when the classic menace vampire moves next door? Not the suburban, melodramatic, romantic vampire, but a guy that’s just a monster?”

If you haven’t seen the original, you should. However, this re-imagining is totally updated with current pop culture; you may even catch Jerry the vampire (Colin Farrell) enjoying an episode of “The Real Housewives of New Jersey.” Charley is a high schooler who finds recent popularity after he ditches his childhood buddy Ed (Christopher Mintz-Plasse) for cooler guys and a hot girlfriend (Imogen Poots). Jerry has just moved in next door, but he works at night and sleeps during the day, so Charley and his mother (Toni Collette) don’t know much about him.

That is until – despite their questionable status as friends – Ed comes to Charley with an outlandish accusation: Jerry is a vampire, and he’s responsible for the growing number of missing people in their community. Charley is skeptical until he catches Jerry enticing and ensnaring his neighbor with the sexual prowess associated with his kind.

“There is an innate sexuality to vampires that really isn’t there with other monsters,” says Yelchin. “Dracula is a love story. But now it’s just geared toward preteen girls, so it becomes a suburban melodrama.”

Often acknowledged as a sex symbol himself, Farrell looks and acts the part. However, he reveals one difficulty he had with accepting the role.

“I loved the original,” says Farrell. “I love the original still. I loved Chris Sarandon’s work as Jerry. I think as a 10- or 11-year-old I had a boy crush on Chris Sarandon. He was so dignified and charismatic and alluring, yet threatening at the same time. I would have been so concerned of walking in his shadow had the character not been designed in a really different way.” The “really different way” he is referring to is the fact that Jerry is not the vampire Sarandon was in 1985 who warned the original Charley Brewster (William Ragsdale) to steer clear, even giving him the option to co-exist peacefully. Farrell’s Jerry is a true beast.

“My character was designed in such a malevolent way that it was really liberating,” says Farrell. “It was fun to explore a character that doesn’t have any human virtue – no fear, no remorse, no compassion. It must be strange to know that you are the most powerful person in the room, literally. He must look at human beings like a child looks at a butterfly before he tears its wings off.”

There are very few similarities in theme and tone to be found between this movie and, say, the Twilight series. Charley eventually makes it his mission to cleanse his Las Vegas community of Jerry by employing the help of famed vampire hunter Peter Vincent (David Tennant) who performs on the strip. With the help of crosses, holy water and a few new gadgets, Charley must fight this battle in the most menacing of locations, the suburbs. Just as the original was a cult classic, this one has the potential to live up to the high expectations of fans. Perhaps the most important critic not only liked what was being done, but he agreed to be part of it.

“There was not a slavish attempt to remake the original,” says Sarandon about why he agreed to make a cameo. “They re-imagined it for modern audiences. Never did I feel, when I was watching it, that I was watching a remake. That to me is a pretty fucking great trick.”