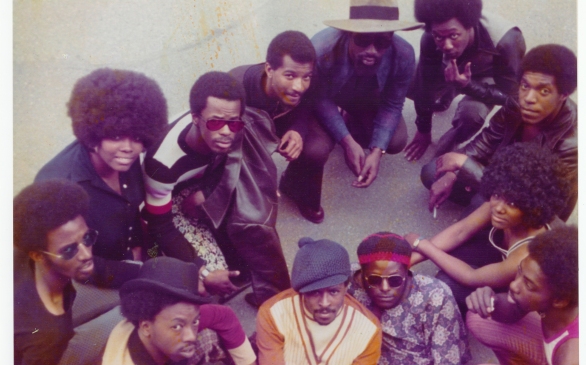 If you’re the kind who still sifts through vinyl and whose living room walls are adorned with a collection of record album art from decades past, then Don’t Knock the Rock is the film festival for you. Founded by indie director Allison Anders and her musician daughter Tiffany Anders, the music documentary film festival is “a high-energy fest dedicated to the love, lust and mania of all pop, rock and roots film and music.”

Not only do they showcase a lineup of rare footages, docs and movies, but attendees also get to see live performances from the very artists featured in the films, dance to DJ intermissions and participate in question and answer sessions with the filmmakers themselves. In the past, the series has featured pieces on Scott Walker and the Runaways and live performances from indie bands like J Mascis and PJ Harvey.

This is their ninth year of digging through showcase-worthy movies that would excite any music-obsessed individual with a definitive taste, and Don’t Knock the Rock continues to please with this year’s lineup at the Cinefamily at the Silent Movie Theatre. On Aug.18, the festival features the L.A. premiere of Wheedle’s Groove and the world premiere of The Jim Sullivan Story.

Wheedle’s Groove paints the “definitive portrait of the 1970’s Seattle Soul Scene,” remembering bands like Black On White Affair, the Soul Swingers and Cold, Bold & Together. The documentary came about when 10 years ago, Seattle local collector DJ Mr. Supreme happened upon Black on White Affair’s “Bold Soul Sister” in a 99-cent bin at a record store. Years later, he found himself with a collection of the forgotten music scene of the ’70s. Wheedle’s Groove features commentaries from Quincy Jones, Sir Mix-A-Lot, Mudhoney’s Mark Arm, Death Cab for Cutie’s Ben Gibbard, Soundgarden’s Ben Shepherd, the Fastbacks’ Kim Warnick and Kenny G. The filmmakers will be present for a Q&A after the screening.

On the same night, they will also be showing The Jim Sullivan Story, a chronicle of Light in the Attic’s Matt Sullivan (no relation) to figure out the mystery behind the folk singer’s disappearance in a New Mexico Desert in 1975. He goes on a cross-country journey involving “hundreds of phone calls, e-mails, letters, faxes, private detectives, telepathy, palm readings and meetings with Jim’s wife, son and producer” to find the truth. Did he get lost in the desert, become a victim of the mafia or did aliens abduct him? Despite not finding an answer, Matt Sullivan surely made an interesting documentary that explores the life of a music great.

On Aug. 20, the festival hosts a roundtable discussing music in film, television and new media. Musicians will get valuable information on how to have their music featured in various and ever changing outlets, and filmmakers will learn how to obtain rights for music in their works. The panel will include songwriter Michael Des Barres, filmmaker Allison Anders (Grace of My Heart, Things Behind the Sun, Gas Food Lodging), music supervisors Tiffany Anders (Kaboom, Like Crazy) and Howard Parr (Sympathy for Delicious, Herbie: Fully Loaded), Doreen Ringer Ross of BMI Music, music publisher John Anderson and more. Afterwards there will be a world premiere of Rhino Ressurected: The Incredibly Strange Story of the World’s Most Famous Record Store. It tells the story of the little record store on Westwood Boulevard, which in its time attracted “hardcore music misfits” and launched many influential music careers. The documentary features live performances from Richard Thompson, Mike Watt, Peter Case, Little Willie G and Thee Midniters, Temple City Kazoo Orchestra and more.

On its last day, Aug. 25, the festival gives you a chance to see The Family Band: The Cowsills Story, a movie about the real-life family that inspired the Partridge Family. Bob and Paul Cowsill will be present for a live performance set, and directors Louise Palanker and Ian Broyles will be there for a Q&A session.

The Cinefamily at the Silent Movie Theatre is located at 611 N. Fairfax Ave., Los Angeles. For more information, visit cinefamily.org/films/dont-knock-the-rock-2011.