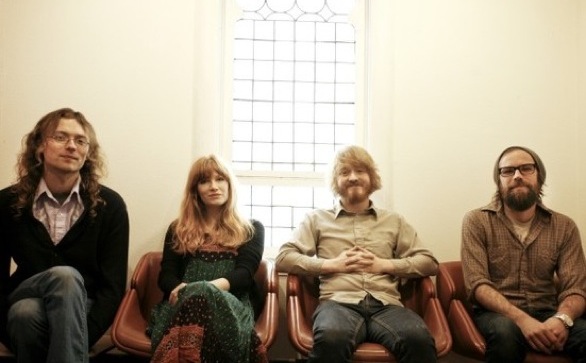 As a folk band with a penchant for psychedelic undertones the Parson Red Heads have kindred spirits in bands like the Fleet Foxes and the Fruit Bats, but the music of the Parsons seems to be very specifically informed by that of the Byrds. Part of the similarity comes from the fact that lead singer Evan Way has a voice that uncannily mirrors that of Byrds singer Roger McGuinn, but the overall resemblance goes much deeper than that.

Like the Byrds the Parson Red Heads rely on uncluttered melodies, ringing guitar and vocals embellished with soaring harmonies, all of which come together nicely on tracks like “When You Love Somebody.” “Time is Running Out” opens with strummed guitar and weepy pedal steel, and recalls the country-flavored work the Byrds did on their Sweetheart of the Rodeo album.

Yearling also gives a nod to another Bay Area act; “Hazy Dream” begins with a psychedelic effect appropriate for a song with such a title but the rest of the song is wistful, down to earth country-rock that sounds like it fell off John Fogarty’s Centerfield album. The obvious influences don’t define Yearling though; they merely reflect knowledge of what’s come before.

Having penned almost all the songs here Way proves to be a talented songwriter, and it doesn’t hurt that the album is produced by Chris Stamey, formerly of the dBs and a legendary master of jangle pop.


Yearling is currently available.
Article posted on 8/17/2011
This article has been viewed 1395 times.