Whole Notes, Half Notes and more 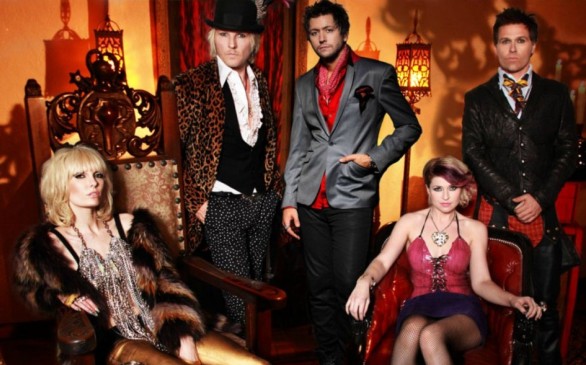 Diamond Baby brings glitz and glamour back to rock.

Are you ready for a band that puts some camp and cabaret into their show? Then you will love the promised theatricality and unpredictability of new electro-rock group Diamond Baby. The five-piece consists of singer Ace of Diamonds, keyboards player Lisa the Lover, guitarist Duke Oz, bass man Mr. Fitz and Baron Von Storm, aka Velvet Revolver/the Cult/Guns N’ Roses drummer Matt Sorum. “The whole concept of Diamond Baby is Studio 54 meets ’80s decadence and new wave,” reveals Ace of Diamonds. “We wanted to bring that glitz and glamour back. It’s an experience.”

The statuesque frontwoman also says that everyone has an alter ego; it’s just that some happen to be over the top.

“It’s all part of the show. The undertone of everything is very sexy and celebratory. It’s okay to escape into music; this is about accepting who you are and going for what you really want in life. You’ve got one shot so take it, go for it.”

You’ll no doubt have plenty of shots at interacting with Diamond Baby; for now check out their debut song and video “The Last Rockstar” online and visit diamondbabyband.com for show dates and news of their upcoming full-length.

Start polishing up those tunes, it’s song contest time! The Nashville Songwriter’s Association International has again partnered with CMT for the 12th Annual NSAI Song Contest. Aspiring songwriters in any genre are encouraged to send their best songs to be judged by a panel of experts, and a new “lyric only” category has been added this year.

The Grand Prize includes a mentoring session with songwriter/musician/industry icon Charlie Daniels. Other prizes include a single-song professional demo, tickets to the 2012 CMT Music Awards in Nashville, a private tour of CMT’s studios, a performance at the Bluebird Café, meetings with major music publishers and a one-year membership to NSAI. Entry fees are $35 for NSAI members and $45 for non-members; entries will be accepted through Oct. 31. nsai.cmt.com.

Anti- Records has announced the release of Raise Your Voice!, a 16-track compilation of music from Anti- artists. The tunes are being offered as a free download for advocates of public broadcasting; anyone who joins the Raise Your Voice campaign to support public broadcasting can download the compilation at no charge. Artists contributing to the comp include Wilco, Dr. Dog, Booker T. Jones, Neko Case, Mavis Staples, Man Man, Tinariwen, Tom Waits, Lost in the Trees, Jolie Holland and several others. The free download is available for a limited time only at ryvoice.org.

If you’re a metal fan you’ll love the new listening page that 20 Buck Spin has added to their Web site where you can stream nearly every release in the label’s catalog for free. Included are hot new titles like death metal act Vastum’s critically-acclaimed Carnal Law and Death of This Dry Season from sludgecore trio Brainoil. Among the more than 20 other releases you can check out are titles from Graves at Sea, Coffins, Wolvserpent, Laudanum, Vargr, Sanctum, Samothrace, Christian Mistress and White Mice. 20buckspin.com.

SoCal native Lex Land, currently an Austin resident, comes home for a CD release show at the Echo Sept. 15. Her sophomore release, Were My Sweetheart to Go, is out this week.

Tiger Army has announced that their fourth annual Octoberflame shows will happen Oct. 28 and 29 at the City National Grove of Anaheim. The band usually comes up with some sort of surprise for the event; in past years they’ve played lots of covers, songs they rarely play and even full-album sets.

And speaking of traditions, All Hail the Yeti will make their third straight appearance at the Sunset Strip Music Fest this Saturday, Aug. 20; the local metal masters will rock the Whisky at about 5 p.m.

La Habra’s Zebrahead are gearing up to unleash a new offering of explosive pop-punk; Get Nice drops on Sept. 27. Singer/rapper Ali Tabatabaee says he thinks the album “will definitely win a Nobel Peace Prize, get you a raise and get your girlfriend pregnant all at the same time.”