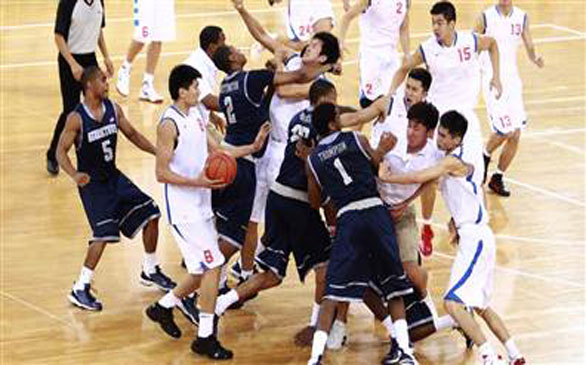 Better stick to pingpong next time.

What was supposed to be a goodwill basketball game between the Georgetown Hoyas and China's Bayi Rockets on Thursday night degenerated into all-out hostility with a chair-tossing, bottle-flying brawl.

The game at the Beijing Olympic basketball arena was timed to coincide with a visit to China by Vice President Joe Biden, although he was with (presumably) more refined company _ a banquet hosted by his Chinese counterpart, Xi Jinping. Biden had attended an earlier, uneventful game between Georgetown and another Chinese team, the Shanxi Zhongyu Brave Dragons.

In a statement early Friday, Georgetown coach John Thompson III expressed regret "that this situation occurred" and said, "We remain grateful for the opportunity our student-athletes are having to engage in a sport they love here in China, while strengthening our understanding of a nation we respect and admire."

There was no immediate comment from the Chinese side. The game was not televised in China, and censors quickly tried to zap away footage from the ubiquitous cellphone cameras that made their way onto Chinese websites _ in keeping with the Chinese government's practice of "harmonizing" the Internet to remove discordant images. Foreign websites such as YouTube, which are blocked in China, nonetheless offered a courtside _ or, perhaps, ringside _ view of the melee.

"It was a really tense game from the beginning because the Chinese team came out playing very aggressively, and the Hoyas weren't prepared," said Sarah Burton, an American expatriate living in Beijing who was in attendance.

Early in the game, the atmosphere turned tense when Bayi forward Xu Zhonghao yelled at Thompson in English, "How can you let your players play like that?" Then, after Georgetown guard Jason Clark objected to a hard foul by another Bayi player, Hu Ke, the benches emptied and fights erupted across the court. Fans jumped into the action.

The video captured an unidentified Chinese man in a white polo shirt and khaki shorts stomping a Georgetown player on the floor. Gene Wang of The Washington Post, one of the few foreign reporters in attendance, wrote that one fan grabbed a stanchion, while an unidentified player pushed Georgetown's Aaron Bowen through a partition, then repeatedly punched him while sitting on his chest. The Georgetown coach pulled his players off the court, ending the game with 9 minutes 32 seconds left and the score tied, 64-64.

At least in the videos, there was no evidence that Chinese officials tried to restrain their players, several of whom were captured on the footage wielding chairs in mid-throw.

"Chinese spectators on the bench side started throwing trash and anything they could find," according to Burton. The Chinese security, "wearing ill-fitting uniforms, came in late and pretended to help, but stood in the doorway and did nothing."

Wang Wei, a columnist with the Chinese sports magazine Play, blamed the Bayi Rockets for starting the fight.

"They shouldn't have lost their temper and started a fight. They were the host. They are a professional team, and the Hoyas are a student team," he said Friday. "Still, it is just a basketball game. It shouldn't go to the diplomatic level and hurt U.S.-China relations."

Chinese players have been frequently fined by basketball federations for fighting with their opponents, and some Chinese fans expressed dismay, calling for heads to roll.

"What has happened to Chinese basketball?" despaired one online commentator. "The head of the Chinese Basketball Association needs to be changed again."

The Bayi Rockets are owned by the Chinese military and have a reputation for "fighting hard, military style," Wang Wei said. The Hoyas were on a 10-day tour of China that had been supported by the State Department as a shining example of sports diplomacy in the vein of the 1971 visit of U.S. pingpong players to China that paved the way for relations between American and Chinese leaders. Before leaving home, the Hoyas made a series of whimsical videos about trying to speak Chinese and use local currency.

In China, where basketball is the most popular sport, there were high expectations before the tour as well that it would promote cultural relations.

The Beijing News, in an editorial published Thursday before the game, opined that basketball had become a "popular, goodwill media to create a relaxing atmosphere" for Biden's visit and the "most important window for the youth of both countries to understand each other."

Understanding? Well, that could be true: Fisticuffs are a common denominator of communication, understood equally in all languages.

(Tommy Yang of the Times' Beijing bureau contributed to this report.)