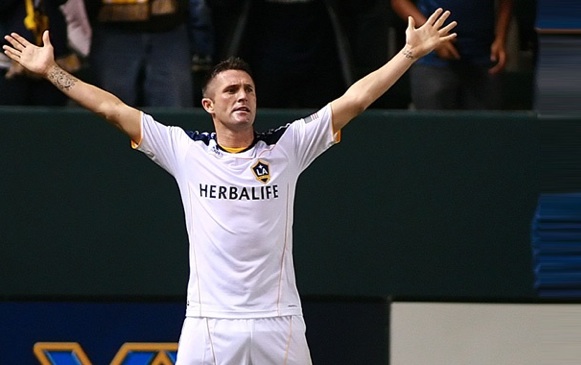 After a Mike Magee goal during stoppage time, the Galaxy went on the capture a 2-0 victory over the visiting San Jose Earthquakes Saturday night at the Home Depot Center in Carson before a sellout crowd of 27,000. With the triumph, Los Angeles’ record improved to 14-3-9 on the season. Their 14 wins and nine ties have secured 50-plus points (the first team in MLS to do so this season), which has been reached 16 total times in club history; they remain atop of the Western Conference standings.

“…I think it’s a positive. The three points is real good,” Galaxy head coach Bruce Arena says of the match.

In the 21st minute, midfielder David Beckham connected with Keane and collected his 11th assist of this campaign. Beckham placed a long ball over the San Jose defense, where a running and attentive Keane managed to fool the goalkeeper and scored on a left-footed shot.

“It was nice to get the first goal, and hopefully there is a lot more to come,” Keane confesses. “When you play with good players, it’s always easy. I think you’ve seen that with my goal with David’s quick thinking, and I was ready for it.”

Magee later penetrated the back of the net well over stoppage time for his third goal of the year. Both Sean Franklin and Landon Donovan received individual assists.

Los Angeles continues its quest in the CONCACAF Champions League tournament, hosting Costa Rican club LD Alajuelense on Thursday, Aug.25, at 7 p.m. The team will then fly to the East Coast for a showdown against the New York Red Bulls on Sunday, Aug. 28, at 4 p.m.

“As a team now, we are going to do the best we can to get back and be prepared for a week that’s going to be real tough with the Champions League game at home on Thursday and then traveling to New York for a game on Sunday,” Arena states.