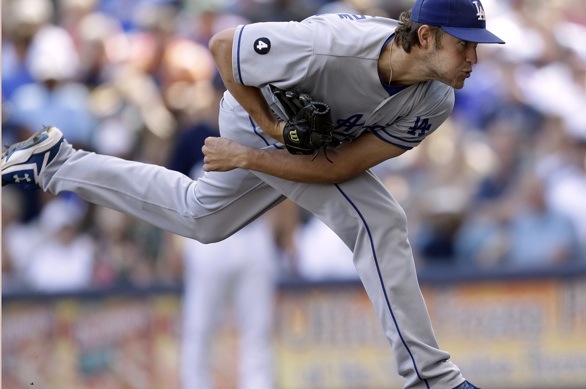 Could Clayton Kershaw be the Dodgers’ next Cy Young Award winner?
(Credit: Benny Sieu/Milwaukee Journal Sentinel/MCT)
Los Angeles wanted a winner. The fans, the city, the media and the organization wanted a winning team prior to the season beginning in April.

What each entity has received has been more than what they could bargain for. Legal ownership battles, hateful crimes, sub-500 play and a bankrupt club have been no easy time for Los Angeles.

But then there is Clayton Kershaw, who at 23 years of age could become the next National League Cy Young Award winner and the first for the L.A. Dodgers since Canadian Éric Gagné won it in 2003. Gagné posted a record of 2-3, but his relief work did the talking when amassing 55 saves with a remarkable 1.20 ERA.

In 1988 when the Dodgers last won the World Series, Orel Hershiser was the last starting pitcher to secure such honors. Hershiser unanimously earned the award with a 23-8 mark, including a 2.26 ERA.

A left-hander with nasty stuff that includes a potent fastball and a devastating curveball, Kershaw has controlled his mound outings since opening day. Currently, Kershaw sports a noticeable 15-5 record filled with brilliance.

The 15 victories are tied for best in the NL, while his 2.60 ERA is fifth and the 1.01 WHIP is second only behind the Philadelphia Phillies’ Cole Hamels. Kershaw has also surrendered fewer hits (140) and total against batting average (.211) than Roy Halladay.

Kershaw’s bread and butter, however, has derived from the strike out statistic. His 199 fanned batters are tops in the NL and second in Major League Baseball behind the Detroit Tigers’ Justin Verlander.

A game dominated by right-handed pitching, baseball has not seen a left hander win the NL Cy Young since Randy Johnson last did it in 2002 to cap his fourth-straight. Quite frankly, if Halladay still pitched for the Toronto Blue Jays, we could easily begin calling Kershaw this year’s Cy Young.