Don't Be Afraid Of The Dark: Katie Holmes in one of Guillermo del Toro’s scariest 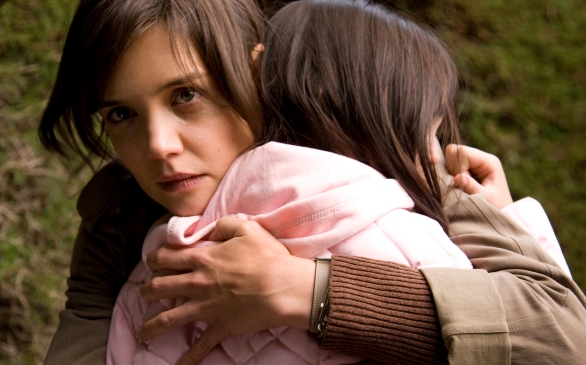 “Hola!” exclaims director Guillermo del Toro as he makes a grand but warm entrance in the Four Seasons suite where he sits down for an interview alongside the posh and sylphlike Katie Holmes, one of the stars of his latest endeavor Don’t Be Afraid of the Dark. It’s based on a 1973 telefilm of the same title that del Toro believes to be “the scariest TV production ever made.”

“I remember the movie fondly. I loved it, and it was the scariest movie I saw as a kid,” del Toro reminisces.

The Pan’s Labyrinth director explains, however, that he has always had different ideas in mind about the film. Before starting the project, he thought that they “can completely change the story, [let it be] the same anecdote but make it a fairy tale gone wrong … about a character that is powerless because of her age.”

Holmes plays Kim, girlfriend of architect Alex Hurst (Guy Pearce) who takes in his young daughter Sally as they move into Blackwood Manor. While Kim and Alex restore the Gothic mansion, Sally begins to hear rasping voices calling out her name from the basement.

“When I was reading the script, I was terrified. I thought, ‘wow, this is going to be amazing.’ I love the world that he [del Toro] creates, and I wish I could think that way,” Holmes raves. “I learned how extremely hardworking Guillermo is and how smart he is with his script, with structure and pacing and the discipline it takes in order to really communicate these incredible visions that are unique to him.”

In playing her character, she explains, “I think that being a mother myself only gave me more insight. I think when you’re a parent you can’t really turn things on and off. Any child in peril means something different to me now that I’m a mother.”

“It is different, however, when the child in danger is a skilled diplomat like Bailee!” del Toro adds. “We were all very shocked hearing Bailee scream. As a parent, you know, we’re like, ‘what are we doing, we're monsters!’” he says with laughter.

Eleven-year-old Bailee Madison plays the movie’s young heroine, Sally. Incredibly poised and articulate indeed, Madison has the presence of someone wise beyond her years.

“The cool part of working with Guillermo is definitely his passion. Seeing all of his vision come to life was really fascinating to watch,” she says.

When asked about her co-star, she recalls, “[Katie] really just took care of me on and off set. She made the set light and bubbly and fun. There was always a lot of energy there. It was such an honor to work with her!”

Madison adds that it was “exciting to be in [her] own scary movie” and that she “liked being scared.” In fact, the MPAA thought that the movie was so scary that it gave Don’t Be Afraid of the Dark an R-rating despite the movie production’s efforts to be PG-13.

What is it about del Toro’s imagination that enables him to create such intricately beautiful worlds with the most frightening creatures?

Del Toro explains, “I really think that [monsters] show the imagination of human beings ... We started talking about angels and demons at the same time. The universe is dual: night and day, cold and hot. One is as powerful as the other in terms of myth. There is the same compulsion, if not more, in the carving of a gargoyle and in the carving of a saint in the same cathedral. … Fantasy is a rebellious, malleable nature. Conformists normally reject fantasy. And we love them because they are in a way the freest part of our spirit.”

To have Guillermo’s caliber of genius is definitely rare. “My dreams are the most boring dreams. I’ve had maybe four interesting dreams in my life, but I’m never bored anywhere. I can be alone in a place waiting in a restaurant and see a guy. What if all of a sudden there’s blood on the floor? I notice that he’s bleeding and then he’s sweating, someone’s going to come in through the door to kill him. … I get all caught up,” del Toro smiles, “and then I look up and of course he’s not bleeding. You know, I entertain myself.”

This could very well be the understatement of the year, because it’s safe to say that his imagination entertains more than himself.

Don’t Be Afraid of the Dark releases in theaters Aug. 26.

Interviews
For Martin Scorsese, making ‘The Irishman’ was about ‘learning to die’
1,482 views
bid=||