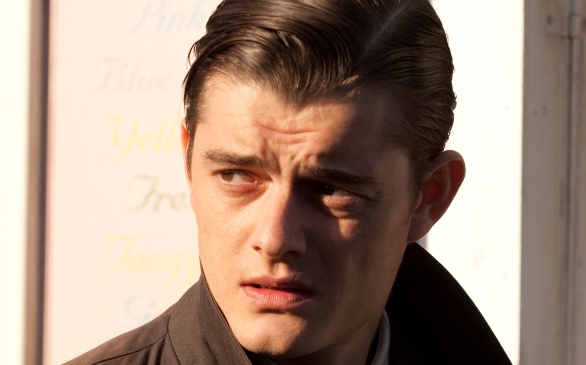 Brighton Rock is a movie that disguises itself as a crime drama but is actually a love story. The movie takes place in the 1960s in Brighton Beach, England, during a time in which 20-somethings are rebelling against the government, and chaos rules over civility. Mopeds, the primary mode of transportation, are prevalent in the movie, as are scenes of mobs congregating to fight with the police with sticks and knives. Rowan Joffe directed the film and adapted the story from a book by Graham Greene, although the book (and its 1947 film verson) was set in the 1930s.

Sam Riley plays the lead role of Pinkie who is a gangster-type character.

He talks about the director’s decision to change the time period for the movie: “I was a little bit skeptical. Rowan had the right ideas, I think. He keeps it in a time frame where there was the death penalty, which is important to the part [in the story]. Revolution was going on at the time, and it also plays a part in the story.”

Riley is known for his previous role in Control, which was received rather well.

“When asked about playing a dark character, if everything is one dimensional or just nice or just sensitive, then it’s not very realistic. I think they [his characters] are dark, but I always find something likeable in them,” he says. “Maybe it’s my face. Maybe I just got one of those faces that looks miserable.”

Being in Brighton Rock alongside Helen Mirren and John Hurt has garnered him some insights into the fickle yet exciting movie industry.

“I’m not formally trained,” he says. “When you’re actually doing a scene with somebody like that, you have got to have your eye on the ball. You don’t think for a second that it’s Helen Mirren or John Hurt or Andy Serkis. You’re in the moment, and then it’s when you go home at night that you think, ‘fuckin’ hell, I’ve just slashed John Hurt across the face.’” In between projects, Riley works hard to keep spirits high. “In the sense of switching off in the life of an actor looking for work, you quite often get called [but] you’ve got the wrong face or you’re too tall or you’re not good enough.”

His career has had its ups and downs but that does not deter him from taking risky roles such as that of Pinkie.

“I’m trying to do more exercise. I’m working on my magnum opus, a post-apocolyptic movie, and I was writing short films and things. I don’t know whether I’m going to do anything [with them], but it keeps me busy. I also watch a lot of films, just to keep my eye on the competition. I’m bored when I’m not working,” he shares.

The love story of Pinkie and Rose (played by Andrea Riseborough) is exquisitely embedded into the gritty outer shell of the film but requires patience from the audience, which is typical of an independent film. The action sequences make up for the scenes that are filled with dialogue and emotion.

Mirren plays Ida Arnold who is a proprietor of a tea house and is thrown into the belly of fire that involves two gangs at war with each other because of Rose’s employment in the tea house. The character lends itself well to the film due to Ida’s determination of pinning Pinkie to a murder. The complex relationship between Rose and Pinkie makes for some teeth grinding as the audience will be frustrated with Pinkie’s evil deeds, but there is room for sympathy as well which makes the film end nicely – so to speak. Audiences may be delighted with Andy Serkis’ character of Mr. Colleoni who is a mob boss.

The mood is murky throughout the film with an opening sequence that shows waters of the ocean moving violently against the shore. The editing is done well, which is a triumph because of the way the story unravels itself.